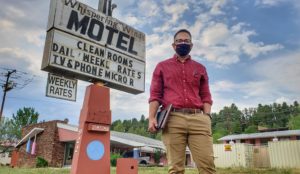 New owners are renovating the Whispering Winds Motel on Old Route 66 in Flagstaff. The 25-room motel was purchased on June 1 for just under $1 million, according to Coconino County records.

“We’re working with Mark Reavis at the City of Flagstaff’s Heritage Preservation Office to renovate the landmark sign,” said Ascend Capital Management Sales and Marketing Dirctor Jose Alvarado. “Our goal is to renovate the whole building.” The Flagstaff-based company has chosen not to raze the Route 66 motor hotel.

“When these old Route 66 motels get demolished, our community loses some of its culture,” said Alvarado.

While contractors gut the guestrooms, developers plan the preservation of the motel’s unique mid-century modern façade. They are using a vintage postcard to guide their process.

Special features of the Whispering Winds mid-century design include pink and turquoise cylinders that house exterior lighting. The company is teaming up with experts at Behr paints to match the colors.

The motel’s flat roof is a trademark design element of mid-century architecture. However, at Whispering Winds, a stylized shallow-pitch canopy over the entry breaks the flat roofline. An architectural feature mounted over the natural rock façade on the front of the structure replicates the angle of the canopy that extends low to the ground. The resulting effect mimics the low-slung roofline, another defining element of mid-mod design, according to Ascend Capital Management representatives. In the 1950s, these design elements were unusual and commanded attention from the curb to draw Route 66 road trippers to their establishments.

“Not a lot of hotels have retained these characteristics and details,” said Alvarado.

Original building materials that have been preserved include natural rock on the south-facing wall.

“Williams, Arizona, has done a lot to maintain and restore some of these historically and culturally significant properties that need it,” Alvarado said. Properties like Whispering Winds have deteriorated since their Route 66 heyday.

The company uses local contractors such as Coconino Electric and Bleekers Boxes when possible.

“The current interior room rehabilitation is being undertaken and is allowable and encouraged for the continued maintenance and vitality of Route 66 motels,” said City of Flagstaff Heritage Preservation Officer Mark Reavis. “I commend the applicant for the careful considerations of the exterior treatment of the motel’s color rehabilitation that will be vibrant and very much in keeping with what Route 66 was all about.”

Route 66, which stretches from Chicago to Santa Monica, is one of the most famous roads in the U.S., and has long been popular with visitors from all over the world. According to studies by Kampgrounds of America, more Americans are replacing vacations, canceled because of COVID concerns, with road trips.

“Feedback we get from our travel industry partners is that travelers want an authentic experience. Authenticity is very important for the international traveler. They want to taste local foods, take a picture that can’t be duplicated in another city and stay at original accommodations like this one,” said Alvarado. “We see a huge demand for that once travel comes back. Whispering Winds is within walking distance to historic downtown Flagstaff, and that will be a draw for millennial travelers. We love our travelers, both international and domestic. They want quality customer service and authenticity, and I think this property provides all these things.”

Alvarado says the company also is working with the Flagstaff Convention and Visitors Bureau to promote tourism. “The end goal is to make an amazing product here in Flagstaff.”

The Flagstaff investors have taken inspiration from the Austin Motel in Austin, Texas, the Phoenix Hotel in San Francisco and Hotel Adelaide in Scottsdale. All are culturally significant buildings.

“Hotel rooms are important for the whole community,” said Alvarado. “The bed tax from these purchases goes to park programs and art programs – it’s such a big part of the local community.”

Currently, the sign is out to bid by two family-owned and operated Arizona companies – one is from Flagstaff, the other from Tempe.

“Once this project is completed, it will be easy for the community to see all the hard work everyone is doing to renovate this property,” said Alvarado. FBN

Getting Your Head in the Game
Supporting Local Businesses Through Training, Resources 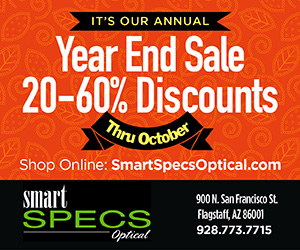