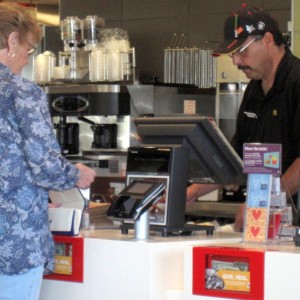 Public pressure for an increased minimum wage advanced last month, with a lawsuit filed in Maricopa County April 14 on behalf of the Flagstaff Living Wage Coalition and a nationwide Fight for $15 rally held April 15 at McDonald’s and other businesses in 230 larger cities.

The lawsuit contests a 2013 law passed by the Arizona Legislature giving only the state the right to regulate employee compensation and benefits. That law contradicts Proposition 202, passed by Arizona voters in 2006 allowing cities to establish higher minimum wage floors than the state, the suit contends.

Attorneys Mik Jordahl of Flagstaff and Shawn Aiken of Phoenix have requested that the legislative override be declared unconstitutional. Their position is detailed in a coalition press release.

The coalition states that winning the lawsuit would mean “that Flagstaff and other cities in Arizona can establish a minimum wage commensurate with local conditions and cost of living.” The specific minimum desired by the group “will be determined after a thorough discussion with local residents, workers and businesses, and informed by reputable economic studies. At the end, a higher local minimum wage has to garner a broadly shared support.”

The Arizona minimum wage is $8.05 per hour as of Jan. 1, when a 1.9 percent increase above the previous $7.90 per hour took effect. The Federal Minimum Wage rate is $7.25, with Arizona among 29 states surpassing it. The Industrial Commission of Arizona counts more than 24,000 workers affected by the state’s minimum wage increase.

Bettering President Barack Obama’s push for a national floor of $10.10, several cities approved higher minimums. The National Employment Law Project records the largest gains as $13 in Chicago by 2019, $15 in San Francisco by 2018, and $15 in Seattle by 2018-2021. Retailers Walmart, Target, T.J. Maxx and Gap Inc. have announced competitively influenced increases to $9 an hour.

Citing research from governing.com, the coalition asserts that private sector workers in Flagstaff earn “the lowest estimated wages adjusted for cost of living in the entire nation. It is more expensive to live in Flagstaff than it is in New York City. We want to make a meaningful difference in the lives of a significant portion of the Flagstaff population who work in the low-wage sectors.”

The coalition references studies indicating “that higher wages mean more money spent on local businesses, a reduction in poverty and a healthier economy. It has little to no effect on employment.”

That perspective challenges Congressional Budget Office Publication No. 4856, which in 2014 estimated that raising the federal minimum wage to $10.10 an hour would eliminate about 500,000 jobs nationwide, while increasing income for 16.5 million workers in an average week.

The effect of a $10.10 minimum wage in the fast food industry could range from fewer employees to higher menu prices, explained Desirae Wright, general manager of a new McDonald’s franchise in Prescott. The affected employees, she says, would be entry level workers, as franchisees most likely would seek more experience for the higher pay. The biggest impact would be pricing, she added, describing a ripple effect across industries and a potential outcome that “people can’t afford to eat here.”

Wright works for McDonald’s of Northern Arizona, operator of 16 locations in Flagstaff, Camp Verde, Sedona, Williams and Prescott. That enterprise, with its main office in Flagstaff, is managed under Owner/Operator Greg Cook. Those 16 stores are among more than 14,350 franchises employing 700,000, or 90 percent, of the McDonald’s workforce.

All franchise workers were excluded from an April 1 announcement by McDonald’s headquarters in Oak Brook, Illinois, that it will raise its minimum wage to $1 above the local rate at company-owned locations. Currently, 90,000 employees at McDonald’s 1,500 corporately-owned locations earn on average $9.01 an hour. By July 1, that average hourly rate will increase to $9.90 for employees at corporately-owned stores, the company reported, and further rise to $10+ an hour in 2016.

Exclusion from that pay rise angered some national franchise employees and motivated their participation in the April 15 rally. The rally was buoyed by the Service Employees International Union (SEIU), whose supporters report that its efforts have spurred 23 states, cities and counties to increase minimum wage rates since November 2012. The SEIU also advocates a “joint employer” designation for McDonald’s under the National Labor Relations Board, a status that would have liability implications not palatable to the company.

Employee-reported wages for McDonald’s nationwide at glassdoor.com range from $8.23 to $8.63 per hour for crew positions, and $10.11 to $10.28 per hour for managers. Those figures are consistent with wages at the newest Northern Arizona location, where entry-level workers are started at $8.25 to $8.50 an hour, Wright says.

Cook’s Flagstaff office issued a written statement about the minimum wage increase: “As an independent McDonald’s owner/operator, we offer the employees working in our restaurants a wage and benefit package that is competitive for our local marketplace. This package includes ample opportunities for advancement, free meals, bonus opportunities, tuition assistance and scholarship programs. In addition, McDonald’s USA recently announced expanded educational opportunities for eligible employees in all restaurants, which will also be available to our employees.”

Analysis of Bureau of Labor Statistics by the Pew Research Center declares that “people at or below the federal minimum (wage) are disproportionately young (50.4 percent ages 16 to 24 and 24 percent ages 16 to 19); 64 percent part-time workers; and mostly living in the South, where only Florida has a minimum wage topping the federal floor.

Making up 4.3 percent of the nation’s workers versus 13.4 percent in 1979, “today’s minimum wage buys more than it did recently,” the Pew analysis acknowledges, “but its real purchasing power is about where it was in the early 1980s – and below its late-1960s peak.” FBN