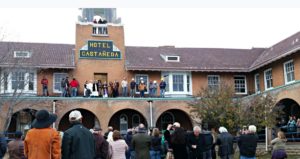 Allan Affeldt, the head of a number of companies including La Posada Hotel in Winslow, will soon reopen another historic property, La Castañeda Hotel in Las Vegas, New Mexico.

The Fred Harvey company is best known for its exemplary service, fresh ingredients and innovative systems that expedited the serving of meals for a train full of passengers who arrived in the West en masse.

Affeldt used tax credits to help fund the New Mexico property, which had been closed as a hotel for more than 70 years. The complicated funding process comes with a variety of hoops through which to jump, one including approval of the final project by the National Park Service.

“It takes an eccentric like me,” chuckled Affeldt, who, with his wife, artist Tina Mion, is the creator of the non-profit Winslow Art Trust. “There has to be some motivation beyond the bottom line, like an appreciation of architecture in communities where, frankly, no one else would [invest]. There are great buildings being destroyed all over the country.”

The connoisseur of historic architecture recently unveiled a replica of La Castañeda’s original sign at a public ceremony.

“The historic credit is for 20 percent on QRE [Qualified Equity Investments] – not on everything – not legal fees, parking lots or land,” explained Affeldt. Neither do qualified expenses include enlarging the building or new construction on the site.

Affeldt described the three-part process for obtaining historic preservation tax credits. “The first part is the statement of significance. It has to be a historically significant building. Part Two is documenting what you are proposing to do. You need to provide great detail on what you will do and how much it will cost. We had to meet Secretary of Interior standards for items such as windows. That is the part that took the longest time for us to get,” said Affeldt, who eventually gained that approval for La Castañeda.

In the third step, the State Historic Preservation Office (SHPO) of the state in which the historic property is located must approve the completed work before the paperwork is sent to the National Park Service, overseen by the Department of the Interior, for final approval. “The approval comes from SHPO; then it goes to the National Park Service. Then you can use the tax credits. The credits are a dollar per dollar reduction of your tax. But very few people owe a million dollars in taxes,” said the developer of the $5 million La Castañeda Hotel renovation.

“As the developer of the project, I need to find someone with a tax credit appetite. CDFI [community development financial institutions] banks need to find qualifying projects for new market credits. But for every 10 project proposals, only one is accepted by the banks, so the developer has to convince the bank that it is a stable, credible project. Chase Bank is a common recipient of tax credits. Wells Fargo does the same thing – they buy credits,” said Affeldt who used U.S. Bank for the New Mexico property.

“Most big banks and utilities have departments that are set up to buy tax credits. Before the latest tax reform, they would buy them for 90 cents per dollar; now it’s more like 80 cents per dollar,” the developer explained. Affeldt believes that his yield will be only 65 cents per dollar spent because of attorney and compliance fees, investor costs and other charges.

According to the Internal Revenue Service (IRS) IRC Section 47, rehabilitation tax credits are only available to the person or entity that holds the title to the property. Since there can be no transfer of the credit without ownership, “syndication through limited partnerships is allowed and is a common tool to bring investors into rehabilitation projects,” states the IRS website. Banks and companies who need tax reductions establish syndicates with developers like Affeldt and become limited partners in the historic renovation project so they can make use of the Historic Preservation Tax incentives. Attorneys write up agreements to establish layers of interlocking companies that dissolve year by year as credits are used.

“That is why there are so many attorneys involved,” said Affeldt. “At the end of five years, the agreement goes away, the whole thing unwinds, and it [La Castañeda] goes back to the Winslow Art Trust and me.”

“It’s important stuff to know if you want to do a restoration on a historic building or a building in a poor community,” he said. “When you put together multiple kinds of credit, it’s called ‘twinning.’ It puts together a vast amount of legal fees.”

For La Castañeda project, Affeldt twined together historic preservation tax credits and new markets tax credits. According to the IRS website, the New Markets Tax Credit Program was enacted by Congress as part of the Community Renewal Tax Relief Act of 2000 and “permits individual and corporate taxpayers to receive a credit against federal income taxes” for investing in poor communities that are qualified by the government.

For those looking to take advantage of these tax incentives, Affeldt advised that the investment should be at least $5 million. “It needs to be a $5 million investment, or it’s not worth the brain drain and the lengthy approval process. For example, the review fee alone is a couple of thousand dollars, and you’ll spend thousands getting through the approval labyrinth.”

He emphasized the necessary passion behind the process. “Find a project that you are really motivated to save because it will take a lot of time and money. Most law firms knowledgeable in tax credits will advise you of that [before you commit to the project]. Their fees often come out of the end of the deal [after retainer fees]. The bank or investment company will take it at the close of the deal.”

Affeldt is waiting for the final sign off for the historic tax credit from the National Park Service this month. “As long as the government [stays open],” he said hopefully. Then once building permits come from the City of Santa Fe, La Castañeda’s South Wing, which includes the spacious lobby with historic staircase, lounge, elevator and the first chunk of guest suites will open in April.

“For a building that has been closed for over 70 years, it’s only been 18 months to get it back together again. That was a condition of the new market tax credit,” said Affeldt, who is doing a phased opening like he did at La Posada. “The architecture, Mission Revival, is different from La Posada – it’s earlier. La Castañeda and La Posada, the first and the last of Fred Harvey’s trackside hotels nicely bookend the railroad history here in the Southwest.”

La Castañeda is located 66 miles east of Santa Fe, New Mexico on I-25 and the Amtrak Southwest Chief line that runs through Winslow and Flagstaff. FBN

Understanding Tinnitus: Ringing in the Ears
On the Grid Podcast – Trending Travel Destinations