By Flagstaff Business News on April 22, 2014 in Tourism 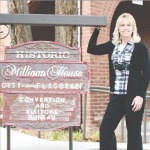 Route 66 is one of the most iconic roads in the United States. Consisting of a total of 2,448 miles and covering 375 miles in the state of Arizona, the highway passes directly through downtown Flagstaff. The historic town and college community is home to shops, restaurants, art galleries, breweries and friendly hospitality from residents. Flagstaff also is a premier destination for beautiful scenery and outdoor activities, promoted as the destination for all seasons.

Located at an elevation of 7,000 feet, Flagstaff has been recognized as one of the best towns in which to live. The aroma of ponderosa pine trees fills the crisp mountain air while the San Francisco Peaks offer a spectacular backdrop for the town. With snowy winters, Arizona Snowbowl attracts skiers and snowboarders from all over the world. It is not uncommon during a hike on the Flagstaff Urban Trail System to pass by elite athletes running or biking during their high altitude training.

The tourism industry is one of the leading economies in Flagstaff. According to Flagstaff’s Convention & Visitors Bureau (CVB), the Flagstaff hospitality industry generates more than 5,400 jobs and delivers nearly $390 million in direct spending.

Last year, the City of Flagstaff’s Bed, Board, and Booze (BBB) tax generated more than $5.9 million in revenue, which goes into economic development, tourism marketing and beautification projects such as maintaining soccer fields, parks and hiking trails.

Many alumni from Northern Arizona University’s Schools of Hotel and Restaurant Management are now leaders in the Flagstaff tourism industry.

“The Northern Arizona University alumni in Flagstaff are the people who keep the tourist industry going,” said CVB Marketing & Public Relations Manager Heather Ainardi. “Our goal at the Conventions & Visitors Bureau is to generate revenue towards the quality of life to benefit the Flagstaff residents. The key component to making this goal successful is the strong relationship we have with Northern Arizona University and the Hotel & Restaurant Management NAU alumni.”

Minesh Patel graduated from NAU in 2001 with a dual bachelor’s degree in accountancy and computer information systems (CIS) from the College of Business. He is now the president of Flagstaff’s Lodging and Restaurant Association.

“My experience at NAU was awesome. My education provided the tools needed in achieving greater standards,” said Patel. “A business owner may be good at what they do, but with further education and a degree, you become great.”

Patel and his family have been residents of Flagstaff for more than 25 years and he grew up in the family business of hospitality. “My hat goes off to the business community of Flagstaff that serves all tourist needs because we have continued to thrive even in the times of economic hardship.”

Brian Konefal is another NAU alum who has contributed to the Flagstaff tourism industry. He is the owner of Coppa Café, a European-style café/bistro. Konefal graduated as a Spanish major and never expected to stay in Flagstaff after college. It was not until he traveled and worked with some of the best chefs in the world that he realized a culinary career would make him happy.

“I have always loved Flagstaff’s vibe, scenery and friendly people. It is eclectic enough to keep a small town interesting,” said Konefal. He advertises on Facebook and Twitter; however, he says the most effective ways to attract customers at Copa Café are through restaurant reviews in publications and word of mouth. “The truth about tourism in this town is that without it, we could not survive.”

CVB Director Heidi Hansen also attended NAU. She worked at The Lumberjack newspaper, where she began developing marketing and advertising skills that would help shape her career. “I enjoy the opportunity to enhance our overall quality of life with the Convention and Visitors Bureau’s efforts, as well as to continue to re-engage with Northern Arizona University.”

Konefal’s, Patel’s, and Hansen’s stories of finding meaningful careers in Flagstaff’s tourism industry are likely encouraging to those NAU students interested in living in Flagstaff after graduating. Their careers, and those like them, will be celebrated the week of May 3-11, which is National Travel and Tourism Week. Flagstaff will be celebrating its visitors, the community workforce that provides service, and the economic impact created by the travel and tourism industry. FBN