You are here: Home / Business / Hot Yoga For Cold Days 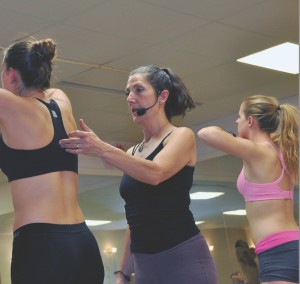 The air outside is nippy, but inside the large exercise studio, sweat is seeping out of the pores of a group of hard-working practitioners who follow every move by and verbal cue from Julia Olguin, the director and owner of the Bikram Yoga of Flagstaff on West Phoenix Avenue, just south of the tracks downtown.

After moving with her family from Southern California to Flagstaff in 2002, Olguin opened her Bikram studio, sometimes called “hot yoga,” in January 2004.

The most distinctive part of the Bikram style is the set of 26 postures (asanas) and two breathing exercises that are performed by students in a room super-heated to 110 degrees with 50 percent humidity.

Olguin has been devotedly practicing this yoga technique for about 25 years, including six years with the man who created it, Bikram Choudhury, who was born in Calcutta, India, and has lived in in Los Angeles for decades.

He devised the heated practice room as a way to warm muscles, prevent injury and cleanse the body by releasing toxins. The method stimulates the organs, glands and nerves, and provides fresh oxygenated blood to the body.

“The key for me is the brilliance of the sequencing of the 26 postures,” Olguin explained. “It’s a very therapeutic yoga. I’ve had 80-year-olds in there, and I’ve had 10-years-olds in there. It’s not competitive; we all do what we can.”

When Olguin, who loves to hike, broke her leg last year in the Grand Canyon, she turned to Bikram as an integral part of her recovery. “It gave me a lot more understanding of what my students are going through,” she said. “For me, to the use the yoga to rehabilitate was pretty incredible and made me appreciate it from a different vantage point.”

Olguin says her career in movement began as a dancer, both ballet and modern, in her hometown of San Pedro. “My ballet teacher had me sub for her when I was 18, so teaching just came naturally for me,” she said. “At the San Pedro YMCA, I worked with seniors with back issues.I was so fascinated by people in pain and how movement could help them. I also did movement for kids, and I got certified in Pilates before people knew what it was.”

At some point, her dancing was not as satisfying, Olguin recalls. “It didn’t feel so good doing so much only on one side. A friend of mine practiced Bikram Yoga, and she invited me to come with her. I was amazed how long I felt good afterward. I took a variety of yoga classes, then I made a commitment to practicing Bikram.”

Before opening the studio, Julia, now 56, and her husband, John Olguin, who just turned 60 and is a professional plumber, spent six months completely renovating the run down interior of an old stone building that had been a restaurant and dance hall located across the drive from Beaver Street Brewery.

Classes are 90 minutes long and designed for practitioners of all levels. In addition to Olguin, three other Bikram-trained teachers alternate teaching the 13 classes that are offered throughout the week.

The move to Flagstaff has been a good one for the Olguin family, which includes their two daughters, Molly, 24, and Michelle, 22, who both attended and graduated from small liberal arts colleges in Massachusetts. The family visited often and spent years planning the relocation to Flagstaff.

“We didn’t want to raise our kids in Los Angeles,” Olguin said. “We wanted a smaller community with less traffic and outdoors in every direction, rather than cities in every direction. We miss our families, but we’ve never regretted the move. We’re so grateful.”

Having a team of teachers is much appreciated by Olguin, who at first had to carry the entire workload. “We’ve worked mostly seven days a week for most of this time,” she recalled.

The Olguins met in San Pedro, where their families were friends. The Olguin ancestry is Basque, and the couple has always wanted to visit Basque Country.

“The littlest one just graduated, so we’re going to take one month in the spring and walk across Spain, the pilgrimage route along the Camino de Santiago,” she said. “We’ll start in southern France and hike across the Pyrenees and end up in western Spain. We just wanted time with each other. It’s a way to celebrate our 25th anniversary.” FBN

Bikram Yoga of Flagstaff is located at 119 W. Phoenix Ave., Suite 4. For more information, call the studio at 928-774-3637. Drop-in classes are $15, and a community class for $8 is offered Sundays at 10 a.m. For class schedule, visit the website at bikramyogaflagstaff.com.

Betsey Bruner is a longtime and award-winning Flagstaff journalist and photographer who operates her Words & Images freelance business out the historic McMillan Building downtown. Reach her by email at betseybruner@gmail.com.