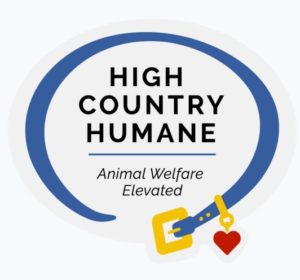 When High Country Humane (HCH) was awarded the contract to start providing animal shelter services for the city and the county, it came with a clear mandate to provide a high level of care for the companion animals in our community.

Based on input from the community, the city and county had recognized the need to make animal welfare a top priority. The county had accepted the donation of the former Second Chance Center for Animals as the new state-of-the-art animal sheltering facility and asked for a corresponding level of care.

The RFP (Request for Proposal) that was issued in April 2018, was stringent in its requirements of the organization that would be awarded the contract. Moving forward, the animal shelter had to adhere to the Association of Shelter Veterinarians Guidelines, the gold standard for care for a high quality shelter operation.

So, what does that mean for the animals who live in our community and the people who love and care for them? It means that everything we do at High Country Humane is done from the viewpoint of asking, “What’s best for the animal?”

Among other things, it means:

Full-time vet care for all animals that come into the shelter. We have two veterinary technicians on staff and will have a full-time veterinarian on staff by late spring. This means that the required spay or neuter surgeries are done on site rather than having to transport the animals to another clinic, which causes additional stress.

Managed owner surrenders. High Country Humane offers surrender counseling, which in many cases leads to an alternative solution that allows the owner to keep the animal.

An example is the person living on a fixed income who can no longer afford to feed their pet. One of our programs helps to provide food that is donated either by private donors or by a program partner such as Purina.

A second example is the cat that was surrendered by its owner because of perceived behavior problems. The cat was urinating outside its litter box. The owner had taken the cat to the vet who determined there was nothing physically wrong; and the exasperated owner surrendered him to HCH in tears. He assumed the cat must have been unhappy living with him and had given up hope. Our vet examined the cat and suspected diabetes. Tests were conducted and the diagnosis was confirmed. The cat was put on insulin and reunited with his owner.

It’s safe to say that this would not have happened in many other shelters; the diabetic cat would have either been handed off to a new unsuspecting owner or euthanized because of his undiagnosed condition.

TNR – We developed and are now implementing a comprehensive community cat management program. Cats are no longer trapped and brought into the shelter to be euthanized. Instead, they are spayed or neutered, vaccinated and returned to their community. This eliminates the vacuum effect that is typically created when cats are simply removed from an area.

High Country Humane will continue to provide the same community outreach and safety net programs, such as the Findlay Toyota Pet Resource Line, which were started by Paw Placement of Northern Arizona, and are funded through private grants and donations.

All of us who are animal lovers are being asked to play a bigger role to support animal welfare and our new shelter. Whether it is to adopt your next furry family member or to volunteer because you’re excited about this new direction in animal care, we encourage everyone to come out for a visit. The shelter is open noon to 7 p.m., Tuesday through Friday, and noon to 4 p.m. Saturday and Sunday to accommodate all schedules. The shelter is closed on Mondays.

We have a lot of work ahead of us but we’re already seeing real progress toward our long-term goal of the shelter being an important part of the larger community, and ultimately becoming a comprehensive animal care center that is a resource for all pet owners. FBN

Pamela Tharp is a board member of High Country Humane.