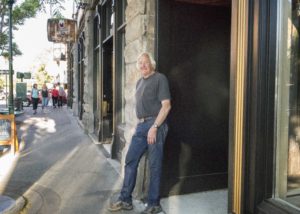 A witty country doctor, cattle ranchers down on their luck and two very savvy Ohio businessmen with “ready money” led the way for the Babbitt Brothers settlement in Flagstaff, starting in 1886.

Stepping off the train to a charred Flagstaff that was devastated by fire just weeks before, David Babbitt turned to his brother, William, and said, “don’t unpack your bags.” But minutes later, they followed their instincts and sought the advice of Dr. D.J. Brennan, who convinced them to purchase a cattle ranch that was available at a reasonable price.

“It was a great deal for them since they didn’t have a lot of wealth, but I think it was the beauty of the San Francisco Peaks and open country that beckoned my grandfather’s brothers to pursue buying the ranch and choosing Flagstaff as a permanent home. At that time, the population in Flagstaff was almost 500,” said Jim Babbitt, grandson of Charles (one of five Babbitt brothers who migrated to Flagstaff).

More than 130 years later, the Babbitts continue to impact the town. The most recent effort is the restoration of the David Babbitt Block in downtown Flagstaff.

Located on the southwest corner of Aspen Avenue and San Francisco Street, across from the Babbitt Brothers Building, the block was built in two stages: in 1907, the east end was constructed, and in 1911, the west side. “In those days the closest architect was in Los Angeles. His name was Albert O. Martin. We were fortunate to find his original drawings, which are slightly faded but readable,” said Babbitt.

Anne Soper, principal architect for UPDESIGN, used the original plans to replicate both sides of the front façade so that they match the details of the original building. “Because the building acts as a central anchor to the downtown district, it was critical that we preserve the integrity of its history. Staying consistent with the classical architecture on the adjacent suites gave us the ability to create new, modernized, functional storefronts while maintaining the historic experience for passersby.”

“We decided to restore the building back into two spaces, which required creating two new entries and storefronts,” said Babbitt. “Additionally, there is new electrical, plumbing, HVAC and ADA bathrooms, but it looks like it did 100 years ago.”

“Mike Tulloss, general manager of Stilley Tulloss Design Build Group, is our general contractor and his crew is exceptional. He orchestrated the renovations and took care of the smallest details, even handcrafting the millwork to match the old. He and his crew cared for the building like it was their own,” said Babbitt.

“This will be one of my most memorable projects and it has been a privilege and a challenge,” said Tulloss. “A basement was added to the new east space and we had to remove approximately 24 inches of dirt. We used a five-gallon bucket and a creative hoist system. We couldn’t un-earth the 18-inch thick sandstone structural wall completely, so we dug, laid steel and poured concrete back in a checkerboard pattern.”

Jennifer Rolley, the owner of the Sweet Shoppe, attributes the success of her business largely to her downtown location in the David Babbitt Block. “The historic vibe is a natural lure for nostalgic candy. I’m always cooking candy, so the smell is enticing. I’m in my ninth year and still growing. I just love it here.”

Shoes-N-Such Boutique on the west end of the building block has been in business at the location since 2013. “We’re really excited about the work they’re doing and I love the charm of the historical buildings. Our customers really enjoy the beauty and I always get comments on the ceiling. It has added to our success.”

“What comes to mind when I think about the Babbitt Family, their businesses and their buildings, are ingenuity, care, quality and community,” said Melissa “Lulu” Yates, owner of Enjoy Flagstaff Tours. “They used their ingenuity and their veritable desire to serve the community by building long-lasting businesses and well-constructed buildings that stand strong today because they were built with sturdy materials and durable designs. Just as the structures became worn, abandoned and in some cases slated for demolition, they were subsequently saved and restored by the Babbitt family themselves.”

“It’s a beautiful location and the patio is fabulous,” said Esteban Flores, general manager and sommelier for Blendz Winery and Bar. “Our customers absolutely love the location. They did a nice job of refurbishing the property. We actually have the original tin ceiling.”