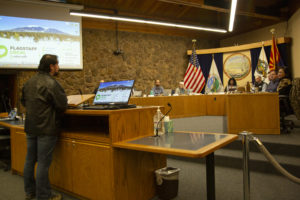 The firm hired by the City of Flagstaff to conduct a study on the effect of minimum wage increases in Flagstaff has pulled out of the process, leaving the study incomplete.

The move comes after a number of city councilmembers expressed concern that the firm, which has relationship with a conservative public policy think tank, could possibly bias the results.

Earlier this month, the council learned that RCG had ties to the conservative Goldwater Institute and expressed concern that the study had the potential for bias. City staff was directed to come up with a remedy.

At the council meeting on Jan. 7, staff members presented a proposal that would bring on a second firm, the Arizona State University-based Seidman Research Institute, to help with the study. The cost of the study, originally set at $48,000, was expected to increase to more than $60,000 with Seidman’s participation.

During discussion, three councilmembers expressed concern that continuing to involve RCG was problematic.

Councilmember Austin Aslan said he was concerned that bias had already been “baked into the cake” with regards to the research being conducted by RCG, and that bringing on another firm likely wouldn’t change the results.

“I’m not sure we’re getting away from the controversy we’re trying to get away from,” Aslan said.

Councilmember Jim McCarthy suggested the matter could be remedied by bringing on a firm acceptable to the Flagstaff Living Wage Coalition – namely, the Grand Canyon Institute.

“If part of the goal is credibility … I think that will move us in this direction,” McCarthy said.

Members of the public also weighed in on the matter, including former Flagstaff City Council candidate Paul Deasy, who said he didn’t believe council should “throw good money after a bad idea.”

Deasy added that flaws in the methodology of the study were likely already present to prevent an objective study. He also said that any study should be conducted over a longer period of time and be more comprehensive for an accurate assessment of the effects of the minimum wage on the city’s residents and businesses.

Mayor Coral Evans stated that council hasn’t seen any results of the study yet. “We have to see the work product,” she said, adding that then it could be held up to the light for public review to determine if the study is flawed. “I’d like to see it.”

Councilmember Regina Salas agreed with Evans, adding that bringing on an additional consultant was not a prudent way to spend taxpayer dollars, which could go to more important functions of the city.

Vice Mayor Adam Shimoni said, “We have one chance to do it right,” adding that the issue was a topic of considerable importance to the community. He, along with McCarthy and Aslan, didn’t wish to proceed with the agreement as currently presented and suggested abandoning the relationship with RCG.

Although the council voted 4-3 to continue with the study as was originally commissioned, Flagstaff City Manager Greg Clifton said that RCG sent a letter to the city late Friday, Jan. 10, announcing the cancellation of the contract.

According to the letter, written by Jim Rounds, president of RCG, “… recent City Council actions and related defamatory public remarks have raised unforeseen challenges for completing the study in a manner that will be reviewed without bias.”

In the letter, Rounds took offense that some councilmembers believed his firm would not produce a sound study free from bias.

Rounds added, “… it appears members of the Council have already formed an opinion on the matter – based on remarks already made – and will continue to be publicly critical of any outcome of the study.”

Seidman also sent a message to the city to acknowledge cessation of work.

In that correspondence, Dennis Hoffman, ASU professor of economics and director of Seidman, stated, “We don’t believe we can do anything to help you at this point other than to note that you can call the Grand Canyon Institute and ask to speak with David Wells.”

Hoffman added that the GCI and Wells do good work and council will likely find him “free from bias.”

“But if you are really serious about getting to the data and study design that will eliminate all questions and concerns from your members/constituents, it will be a tall, tall order and a very expensive study indeed,” Hoffman wrote.

A large portion of the work had already been completed, Clifton said.

“We will receive data and information that have been gathered,” Clifton said, adding that he is hopeful the work conducted will offer some benefit to the city and residents on how the minimum-wage increases have impacted Flagstaff businesses and workers.

As for any future studies regarding the minimum wage, Clifton said, “We are at council’s pleasure at this point,” and he added that he anticipates further discussion by the council on the issue at the next budget process, which will begin with a retreat on Feb. 3 and 4. FBN