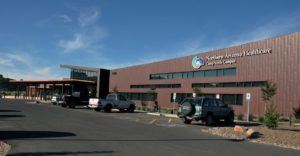 A surprising sign of development, its sleek profile rears up from a wide-open landscape dotted with desert grassland and chaparral. The structure is the brand-new Camp Verde Campus of Northern Arizona Healthcare.

Located at the intersection of Highway 260 and Finney Flat Road in the town of Camp Verde in Yavapai County, the architectural design of the rustic steel building nicely complements the surrounding natural setting.

Feted at a grand opening on Friday, June 10, the celebrations for the NAH Camp Verde Campus gave more than 500 people an opportunity to tour the inside of the state-of-the-art, 26,000-square-foot facility.

The event included a flag-raising ceremony by the Camp Verde Boy Scouts, and speeches by dignitaries such as Robert P. Thames, NAH president and CEO, Alice Gagnaire, vice chair of the NAH Board of Directors and Charles German, mayor of Camp Verde. By the end of June, the medical center had begun to treat new patients.

The previous Camp Verde medical center was a 10,000-square-foot facility, which was at capacity and did not allow for further growth.

“Rigorous research and strategic planning went into the project to ensure the facility would meet the needs of the growing area,” she explained. “A series of focus groups and community forums were held in 2013, and the feedback from the Camp Verde residents was the biggest influencing factor to the design and services offered at the new campus.”

Firminger said the facility is an ambulatory, or outpatient, care center.

The site also includes a parking pad for helicopters to provide safe transfer of critically ill or injured patients. “The Camp Verde Campus provides a resource for the community that most rural towns don’t have,” Firminger said. “More importantly, for the residents, it means they have access to care when it’s most convenient for them.”

The creation of the new medical facility evolved over the past few years. Three years ago, Charles German, when he was a mayor-elect of Camp Verde, said he began conversations with representatives with Verde Valley Medical Center in Cottonwood about the need for Camp Verde citizens to have better access to the health system in Camp Verde.

“We agreed that it was important for easy access to health care for Camp Verde citizens and that driving 20 miles to and from Camp Verde to Cottonwood posed additional problems and complications for residents with health issues,” said German, now serving as mayor of Camp Verde. “We also agreed that with the (VVMC/NAHC) building in Camp Verde, their new site would also provide residents that quality health care, and access was going to be right here in their own neighborhood.”

The facility is on 29 acres with opportunity to expand in the future. The Camp Verde facility is part of the Northern Arizona Healthcare family, the largest health care organization in a region that covers more than 50,000 square miles.

The Camp Verde medical complex promises to “act as an anchor for future construction of homes and business right there in that locale,” German noted.

“I have been a resident for the majority of my life since 1951, with the exception of college time at NAU and four years in the military,” he recalled. “So I have seen lots of changes and watched as Sedona, Clarkdale, Cottonwood and even areas within Yavapai County enjoy economic growth. Understandably, areas with infrastructure are going to grow more rapidly. That’s exactly what has happened over the years.”

“Northern Arizona Healthcare is always looking to recruit more primary care providers and specialists to fulfill the needs of the community,” Firminger observed.               Operating as a nonprofit healthcare system, NAH is governed by a volunteer board of directors.

According to the KCS website, the Camp Verde facility is the first phase of a three-phased NAH master plan that will eventually encompass just under 30 acres of land.

“The interest in the Finney Flat location has increased dramatically since they announced construction and broke ground,” German concluded. “We have new construction of businesses slated to open soon and additional construction in the planning stages, including three residential subdivisions.” FBN