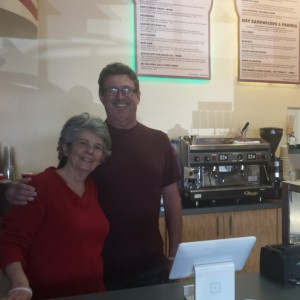 When Reggie and Sharlene Fouser opened Jitters Gourmet Coffee, they set out to create a place where locals gather and tourists are welcome. The first Jitters opened in May 1997 in the Santa Fe Plaza on East Route 66. The location offered easy access and plenty of parking, and most importantly to the Fousers, was located on the east side of Flagstaff. Jitters soon become known for its mochas, lattes, flavored sodas and one-of-a-kind sandwiches and salads, especially the Szechuan pasta salad, which is only served once every six weeks.

Melissa Cripps, a State Farm agent with an office in the plaza, anxiously awaited the opening of Jitters. “We watched as they built the outside patio and brought in furniture. On opening day, I went in for my mid-morning break and ordered a coffee. Reggie said, ‘Why don’t you try a mocha.’ I did and to this day, Jitters still makes the best mocha in town.”

In 2001, the Fousers sold Jitters and opened Confettis Party Store, with the goal of working far fewer hours and finding a business niché in Flagstaff. Jitters remained in the same location until it closed in 2007.

After five years, Confettis could no longer make a profit and the Fousers closed the store. “It was easier and cheaper for people to order party supplies online. There was no way we could compete with Amazon. But the biggest financial impact was the cost of helium. As a party store, helium balloons were a staple. In 2011, there was actually a worldwide shortage of helium. A large tank of the gas that used to cost $65 went up to $350. There was no way to pass that increase on to our customers. And because of the shortage, medical suppliers and hospitals had top priority; party stores were at the bottom of the list. It was no longer financially viable for us to stay in business.”

But Reggie and Sharlene were not ready to retire. “We realized how much we missed our regular customers at the coffee shop. So we decided to open another lunch and coffee shop,” explained Sharlene. They needed a new name and wanted something the locals would recognize that also incorporated their goal to cater to the business community by providing a fast, healthy and tasty menu. As a result, Jitters LunchBox opened on 4th Street in 2012.

“I told Reggie, if we were going to do this again, I wanted to be on Fourth Street because it was important to me to support the corridor and efforts to build up that area,” said Sharlene.

Within weeks, even without advertising, locals found Jitters and the owners they loved. “It was so good to see Reggie and Sharlene behind the counter again,” said Cripps. “The food and drinks are just as good, if not better, than the original coffee shop.”

Because of the location, Jitters gained a great deal of new customers as well.

After two years on Fourth Street, lease issues caused Jitters to find a new location or once again close. Fortunately, there was a space open on the far east end of the Santa Fe Plaza, which was perfect because it was still on the eastside of town. Reggie learned the space was already spoken for by one of the other businesses in the plaza. However, they could have the space that was being vacated. As fate would have it, it was the original location of the first Jitters, patio and all.

The Fousers jumped at the opportunity, saying it felt like they were coming home. The space underwent a facelift to create an open, airy, modern restaurant with a retro flair. The background music is from the 1950s, ‘60s and ‘70s, and the decor highlights Flagstaff and Route 66. Photos of iconic Flagstaff landmarks with lunchboxes superimposed in the background adorn the walls. And, lunchboxes – new and old – are on display throughout. In addition, gifts and cards are available for purchase.

The larger kitchen allows Sharlene to create all the menu favorites, as well as some new items such as paninis, soups, cookies and cinnamon rolls. The coffee menu was expanded and teas were added. Flavored sodas are mixed upon request.

For the Fousers and customers, it is déjà vu – same location, same people, same food quality, same owners and even the same employees. Brandy Goepfrich and Charlotte Davidson have both worked at Jitters for more than 10 years. “They are the best employers, but they are also family,” said Goepfrich. “When people come in, they are greeted by name. They truly care for their customers and the community; I wouldn’t want to work for anyone else.”

When asked about the challenges, ironically, Reggie said it is the location. “We love this location, but it is a destination location; people have to want to come here. When we were on Fourth Street, we had constant walk-in business, mostly from all the other businesses in the area. Now, most people have to drive here.”

Fortunately for Jitters and other businesses in the plaza, some larger businesses are coming to the eastside. Harbor Freight and Tools will be opening in the next couple of months, just doors away from Jitters. The new Harkins Theaters, Autopark expansion and other stores near the mall will also bring additional business to the eastside.

The location is not a deterrent for long-time customer, Kathy Barnett. “Jitters is my go-to place. Every Friday, coworkers from Chase Bank and other friends meet at Jitters for lunch. It is important to us to support locally owned small businesses and Reggie and Sharlene are just the best people.” Barnett’s son also worked at Jitters until he went away to college.

Jitters is open from 8 a.m. to 3 p.m., Monday through Friday. On the weekends, the Fousers tend to their numerous rescue animals, spend time with their children and grandchildren, and enjoy all that Flagstaff has to offer. In her free time, Sharlene is part of the historic Route 66 Association of Arizona. This year is especially busy as Route 66 marks 90 years.

“I love that we are back on Route 66 and I love that we get to serve the amazing people of Flagstaff,” said Sharlene with a big smile, donning her Route 66 cap and Jitters shirt. “We are blessed, for sure.”