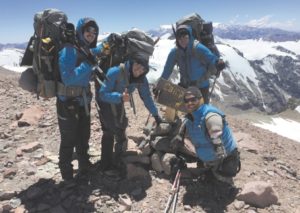 Kyle Maynard and his long-time friend and business partner Joey Leonardo know all about failure. Before becoming world-class mountaineers, they were not even campers. “We didn’t know how to put up a tent,” said Joey.

Today, they have over-the-top memories of viewing the world from some of the world’s highest peaks. But, getting there took a rocky path and a mountain of challenges. Their climb in every endeavor is strewn with seemingly insurmountable difficulties. Their success across slippery slopes has largely been made possible through the power of engineering solutions, creativity and the human spirit.

Maynard was born with a condition known as congenital amputation. His arms end at the elbows; his legs end at the knees. Throughout his life, he has set goals and continued to attack them from different angles until finding a way to achieve them. An athlete all his life, he wrestled in school and placed in the top 12 in the nation in his weight class. His coach helped him develop techniques by tying his own sleeves to better understand Maynard’s abilities.

Maynard also played football and became a powerful defensive force using his helmeted head as a weapon to take down the charging offense. He continues to lift weights and compete in Brazilian Jiu–Jitsu.

Friends since they were 11, Maynard and Leonardo made the decision in 2011 to become mountain climbers. The mountains they would pursue would not be just any mountains. They wanted the biggest on every continent.

“When I was first asked how I was going to be able to climb Mount Kilimanjaro, my answer was, ‘I don’t know,’” said Maynard. “These are three of the most important words of my life. All discoveries happen from ‘I don’t know.’”

“When it comes to hiking, Maynard can’t just go to REI and buy hiking boots. Being creative has been a common theme throughout his life,” said Leonardo. “Starting and stopping, trying and failing is all part of it. With everything that didn’t work we’d ask ourselves, ‘What else is possible?’”

Maynard and Leonardo started out wrapping Maynard’s limbs in towels, potholders and duct tape. They tried neoprene sleeves, which did not allow his skin to breathe and left him pooling in sweat. They also fashioned shoes out of mountain bike tires. “That was our best system, but it ended up taking two, three, four hours to tape everything together and just get him ready,” said Leonardo. And then if he got a rock in his boot, we had to take it all off, get the rock out, and re-tape.”

Aside from finding the right equipment, they had other issues. “Before we climbed Mount Kilimanjaro in Africa in 2012 and Mount Aconcagua in South America in 2016, we had epic failures,” said Leonardo.

They attempted a CrossFit competition that included a sprint up Stone Mountain in Georgia, known as the world’s largest piece of granite. Maynard was outfitted with leather welding sleeves, which tore the skin off the ends of his arms. It took other climbers 20 minutes. Maynard struggled for almost two hours.

“Once he got to the top from his own hard work, it was breathtaking beautiful,” said Leonardo.

“I wanted more,” said Maynard. “That night, I said, ‘I want to climb Mount Kilimanjaro. I don’t know if I can. I don’t if I can’t, but I want to try to figure it out.”

Other mountain climbing experiences left them lost, sick, blistered, injured, dehydrated and discouraged. They climbed Blood Mountain at the beginning of the Appalachian Trail. In three hours, they covered just 200 yards and had to turn around.

“With any challenge that you face, it’s not just A + B equals a solution,” said Maynard.

Whether fate, luck or perseverance, they connected with Flagstaff engineer Danny Giovale, founder of the mountain climbing footwear company, Kahtoola. “He said, ‘Yeah, I can customize crampons,” recalled Leonardo.

“Kyle Maynard is an amazing individual. He has these carbon fiber orthotics that he puts on, and we were able to mount some micro spikes on the rear sections and then some little crampons on the front and he was successful in his Kilimanjaro climb. That set him off on the first round of what’s becoming possibly a seven summits attempt,” said Giovale. “After he climbed Aconcagua, we re-doubled our efforts and redesigned those to include full-blown crampons on the rear and front that has a harness system that he can take on and off. It’s just so cool to be able to work with such an inspiring person. Personalizing gear to fit Maynard goes right along with what we do with our other products – trying to increase the capabilities of humans.”

For Aconcagua, Maynard also used a hypoxic tent to sleep in at his sea-level home in San Diego. It is used to simulate a higher altitude with reduced oxygen to help the body adapt by producing more oxygen-carrying red blood cells and hemoglobin. Climbers use hypoxic tents to enhance performance and to avoid altitude sickness.

“The lowest point for me at both big climbs, was when I reached that last possible place where I could have been helicoptered out. When I’m bear-climbing for 30 miles straight, that helicopter landing pad was definitely going through my head,” said Maynard. “But getting to a place that there’s no way my wheelchair could have brought me – that’s what I love. I want to have my life mean something.” FBN

Maynard will share more about his journey and how engineering solutions have helped him achieve his dreams at the W. L. Gore & Associates Keynote Presentation, at 7 p.m., Friday, Sept. 22, in NAU’s Ardrey Auditorium. The presentation follows a performance by the NAU Community Dance Academy. Tickets are free on a first-come, first-served basis at the door or ahead of time. They can also be picked up or printed out in advance through the NAU Central Ticket Office (nau.edu/cto; 928-523-5661).