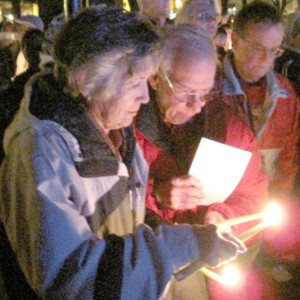 The February confirmation of Aid Worker Kayla Mueller’s death in ISIS captivity has left her hometown of Prescott, her alma mater, Northern Arizona University, and the rest of the civilized world to shoulder her life’s work, mission and legacy.

“I find God in the suffering eyes reflected in mine,” the 26-year-old once wrote. “If this is how you are revealed to me, this is how I will forever seek you.”

Humanitarianism, which defined Mueller, reduces barriers between peoples and provokes seeing other races as human beings, according to eulogists. The Mueller remembered by The Rev. Kathleen Day would deflect awareness from herself in order to increase empathy and aid for the suffering peoples of the world.

Rev. Day, who heads up United Christian Ministry for Northern Arizona University, advocated engaging “in really serious conversation — not about revenge — but about help… especially for the children. Most of these children are not in school. If you are a young Syrian teen, and your family is starving to death, you have zero options. ISIS is the only path to survival. That’s sobering.”

Mueller posted to Facebook in March 2013 her impressions of a non-violent Syrian uprising, Rev. Day said. “She wanted to tell the world that there was no fuel, no electricity, no food. She was helping, but she was also bearing witness by being there and posting a stream [of awareness] into all of our consciousness.”

Amnesty International describes similar impacts in its February 2015 Report: Hardship, Hope and Resettlement. “While the sheer number of those displaced by the four-year crisis [in Syria] is astounding, it doesn’t reflect the full impact the conflict is having on the people affected by it,” the report states.

The conflict has claimed more than 190,000 lives and displaced more than 11 million people, the report concludes, with 7.6 million taking refuge within Syria and nearly four million encamped in Turkey, Lebanon, Jordan, Iraq and Egypt.

“Behind every number is a face, a name, a person who has experienced deep loss and who  hopes for a better future,” the relief agency states in a call to action targeted to wealthier nations.

Those faces, those names, those persons are among those that Mueller strove so vitally to help and protect. Mueller rallied friends and readers on web posts, Rev. Day explained, urging them to keep Syrian refugees in “meditation.”

Mary Poole, Ph.D., chair of global studies at Prescott College, said, “Humanitarianism breaks down a false sense that people living, say in Syria or Palestine, are fundamentally different than people living on this continent. [It] leads people to wade into complexity. Working closely with people complicates stereotypes [and] reveals common ground.”

Assimilating into a culture in its element opens the mind to possibilities, empathy and tolerance. The ravages of war, bombs, disease and death were the gritty, gut-wrenching and heart-breaking realities of Mueller’s sphere. She willingly swapped rose-colored, citizen-of-the world lenses for a full-immersion, hands-on, humanitarian mitzvah of life and death proportions.

Building on that theme, the Mueller family has established a non-profit foundation at www.kaylashands.org to help support families displaced by war, famine and natural disasters.

Giving to agencies that provide relief and humanitarian aid is one way to advance Mueller’s causes, Rev. Day suggested. “A great majority of us live in abundance, even if we feel we are [of] modest [means].”

Giving up Western comforts and what many would perceive as a “normal” life, Mueller embarked on a life journey that would expose and help remedy the misfortune of others, according to Wayne Regina, Psy.D., professor of psychology and peace studies at Prescott College.

“Kayla found the suffering of others too great to ignore, and she went where she felt called to serve,” Regina said. “It almost seems as if [she] was born to serve and find ways to relieve suffering and call attention to injustice and suffering… I believe Kayla always had that spirit, and she dedicated her life to right action to relieve suffering where and when she found it.”

Poole and Regina acknowledged the specialness of Mueller, while noting that she exemplifies a generational desire to serve others.

“I find that many people of her generation are moved to reach across the world to add their support to problems that may seem far flung,” Poole said. “They do that because they see that the challenges faced by people and societies everywhere are connected, and the well-being of all of us depends on building collaborative approaches. By caring in such tangible ways about the world, Kayla was caring tangibly for her own community.”

In turn, that caring spurred Mueller to definitive action. “The sacrifice that people like Kayla make every day to health, comfort and security can be experienced positively,” Poole said. “If you believe that the problems of the world are connected and you want your life to count ― to contribute to solutions ― then sacrifice can make you feel closer to others working similarly for solutions.”

The bottom line, Rev. Day concluded, is that “all lives matter. We are wrestling with that more and more in this country and trying to understand the implications… For each of us, it is caring about the world far away, but also caring about the suffering that is right before us… We need to become a people that does not allow suffering to become normal for anybody.” FBN