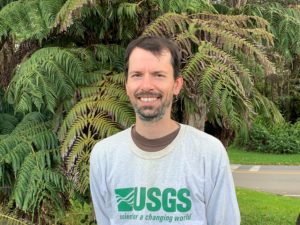 For the first time since 1983, Kīlauea Volcano, on the Big Island of Hawaii, is not erupting. The world’s most active volcano ended its 35-year magma run in a spectacular grand finale of fiery fountains and high-volume molten rock rivers between May and August 2018. As a result of the massive and explosive event, much has changed: scientists now have a better understanding of how Hawaii works; drones have earned their place in the study and safety of future volatile events; and the Big Island itself is now 875 acres larger.

As volcanologists continue to monitor, measure and observe the now-quiet Kīlauea, they are very interested in the acid lake that is refilling the caldera and replacing the magma that emptied and redeposited itself last year. But also, Kīlauea’s bulging volcanic neighbor, Mauna Loa, is demanding some attention.

Best Example of a Caldera Collapse

Standing on the rim of the Halemaʻumaʻu Crater, U.S. Geological Survey researcher Matt Patrick with the Hawaii Volcano Observatory, points out visible evidence of the large collapse of the crater floor at the Kīlauea Volcano summit. “This caldera collapse event is arguably the best observed caldera collapse event anywhere on Earth in the modern record,” he said.

Kīlauea’s caldera was a lava lake before last year’s eruption, triggered by hundreds of earthquakes. Through a period of three to four months, the crater floor dropped 2,000 feet and moved 800 million cubic meters of lava underground to reemerge through new cracks in forests and neighborhoods on the east side of the island 25 miles away. “So, it emptied here and erupted there,” he said.

Researchers learned that Kīlauea has a close connection between its summit magma chamber and the eruptions that occurred on the flank of the volcano, the rift zones. “What we observed is that over the 2018 eruption, the caldera collapse was incremental. It was highly episodic,” said Patrick. “Every day or two we’d have a collapse event and the floor of the caldera would drop several yards. What we observed was that an East Lower Rift Zone (ELRZ) eruption was happening at the same time as when a collapse event would happen at the summit. We’d see a surge of lava erupting from a vent on the lower flank and this is a distance of 40 kilometers, so this is a long distance that magma was moving. We saw that surge in the eruption on the lower flank happen within minutes. That was telling us that this was probably a pressure pulse that was moving down that magmatic conduit at high velocities.”

It also told researchers that they could predict the next burst of destruction moments before dense jungle would be mowed down, houses destroyed, and roads and beaches swallowed up. Surprisingly, the magma flow did not follow earlier lava tubes, but created new ones, flowing to the Pacific Ocean.

“Over the past year, we’ve been in this recovery stage. The magma chamber is recharging. We know that from instruments on the crater floor. And, one of the recent developments that we’ve had over the past couple months is that we’ve seen water seep back into this collapsed depression that formed last year. This is the first time in at least 200 years that a body of water has formed here at the summit.”

The Creation of an Acid Lake

Crater lakes that form atop volcanoes are typically acidic, with pH values as low as 0.1, which could burn skin. In comparison, normal lake water has relatively neutral pH values near 7.0. A late October measurement of Kīlauea’s new acid lake, made possible through the use of a drone gathering a water sample with a plastic sock, shows the pH at 4.0, which Patrick calls “intermediate acidity” for volcanic lakes. “This shows us that fresh groundwater is probably mixing in.”

However, he says, this is cause for concern. “Kīlauea has had an explosive history for hundreds of years. Those explosions were thought to have been triggered by magma interacting with groundwater. And so, in the future, if magma rises in such a way that it interacts with groundwater here or the water pond that we have now, it could potentially trigger explosive activity and that would obviously be very hazardous.”

Currently, there are no signs of imminent danger from explosions. In addition, Patrick says steam venting from the caldera is largely water vapor, not toxic gas.

“There was concern about carbon dioxide coming out of the volcano. CO2 can be a hazard when it pools or ponds in depressions, like the depression that we have at the summit. A drone that was used over the past week flew with a gas sensor and was able to measure the CO2 concentrations and those levels weren’t elevated, at least in preliminary values.”

Drone Use for Science and Safety

Flagstaff USGS volcanologists Greg Vaughan and Elise Rumpf, along with drone pilots John Vogel and Geoff Debenedetto, were called to Kilauea last year to help with field measurements and mapping of the ever-changing location and characteristics of lava flows, including some 24 different fissures. Vaughan says the highest temperature recorded at an eruption site was more than 2,000 degrees Fahrenheit.

“In all of the observations we make from satellites overhead, helicopters in the air and researchers on the ground, drones fill a really important niche. You can fly 1,000 feet above the flows and safely map out an area, not putting any humans in danger,” he said. “They have better views than a satellite as they fly under the clouds, and the person flying the drone sees what the drone sees in real time. We will, no doubt, be seeing more drone use in the future.”

Currently, unmanned drones are limited as to how long they can stay in the air, but Patrick agrees, technological advances will make them increasingly valuable as tools for scientific study.

In addition, during the eruption, a drone was credited with leading an individual to safety. In late May, a U.S. Department of the Interior team was flying a drone to help map the flows in the subdivision of Leilani Estates as a new outbreak of lava was rapidly moving into the neighborhood. “The team overheard radio transmissions that a resident was trapped,” said Vaughan. “They were able to communicate with the individual and instruct him to follow the drone through the jungle.”

Using a cell phone flashlight and the drone for guidance, the resident met up with emergency responders and the rescue effort was deemed a success.

While Hawaii scientists continue to monitor Kīlauea, they are also keeping a close eye on another shield volcano. Mauna Loa is the world’s largest and one of the most active volcanoes, looming at 13,678 feet above sea level and covering half of the island.

“For the past several years, we’ve seen Mauna Loa inflating and we’ve seen an increase in earthquake activity at the summit,” said Patrick. “Those are signs that potentially could lead to a future eruption. Mauna Loa is another very hazardous volcano. It produces eruptions at very high rates and large lava flows, sometimes fast-moving lava flows. It has the potential of threatening residential areas in Hawaii.”

From the geochemistry of the lava, Patrick says each volcano has its own distinct plumbing system.

Mauna Loa last erupted in 1984 and currently is in its longest period of inactivity ever recorded. “I would not be surprised if it erupted again in my lifetime,” said Vaughan. FBN