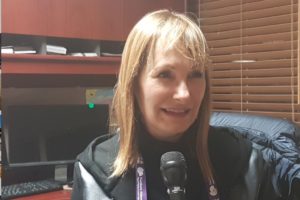 Support for women of all ages in film industry power positions was a noticeable theme throughout the 24th Annual Sedona International Film Festival. Producers, directors and actors demonstrated and voiced their encouragement for more women in leadership roles.

Executive Producer Gale Anne Hurd told the story of Wilma Mankiller, the first female chief of the Cherokee Nation in the documentary, Mankiller.

“Almost every project that I do, regardless of the genre, seems to have something in common, which is ordinary people thrust into extraordinary circumstances who find the strength and will within themselves to succeed,” said Hurd. “That was true of Sarah Connor, who is a waitress at a Bob’s Big Boy, essentially, in Terminator. It was true of Ellen Ripley in Aliens who was working on a loading dock before she went back to face her greatest fear. And it’s very much true of Wilma Mankiller, whose family was part of an urban relocation program, which was her own personal Trail of Tears. After returning to the Cherokee lands in Oklahoma, she was living in her car with her two young daughters. And seven years later, she was the elected principal chief of the Cherokee Nation. They are remarkable stories, but the amazing thing about this one is that it’s true.”

Hurd showcases Mankiller’s struggles and successes: her work as a political activist and feminist; and, her decade-long service as the top Cherokee leader who fought to improve her nation’s health care, education system and government.

“There are a lot of messages I’d like people to walk away from Mankiller with. The first is that Wilma was the quintessential leader. She was someone who believed in servant leadership,” she said. “And secondly, however bad a day you may be having, think about what Wilma went through. Wilma was poor. She had terrible physical illnesses. She was in a car accident and had 17 surgeries. She overcame incredible and rampant sexism, but at the end of the day, she was one of the best leaders in the history of the Cherokee Nation and when she ran for the second time for chief, she was elected with over 82 percent of the vote. So, I think it’s really a message of perseverance and humility.”

The power of perseverance is also a message delivered at the festival by filmmaker and Emmy-award-winning actress Cady McClain. Her film, Seeing​ is​ ​Believing: ​Women​ ​Direct​, is​ ​a​ ​documentary​ she ​directed, ​executive​ ​produced, ​wrote and edited. ​​In it, she features​ ​female​ ​directors and offers a glimpse into their artistic and leadership roles in hopes of inspiring women and girls.

“I think a lot of people, women especially, don’t have access to these stories or access to mentorship,” she said. “My goal is to make these women, through this film, available to other women so they can have the encouragement and the support and the insights they need to not feel like they’re so alone floating out there in the world trying to do what they want to do against such incredible odds.”

McClain says, in 2017, 8 percent of the top 100 films were directed by women. “Although this is a 4 percent increase from 2016, it is still very far away from something that looks like parity.”

The Center for the Study of Women in Television and Film says females comprised 18 percent of directors, writers, producers, executive producers, editors and cinematographers working on the top 250 grossing films last year. McClain calls this low representation in the film industry a symptom of a larger problem: an ingrained cultural bias against women’s ability to lead.

“I’m an honest optimist, so I will tell you, it’s going to be a continued battle, a continued effort. Groups need to come together to support one another to keep making the push and making the change happen. But the change is happening,” she said.

“I think the statistics are nowhere near where they should be,” said Hurd. “Right now, with ‘Me Too,’ and the awareness of how unfair it’s been for women, you’re seeing so many more movies directed by women. So, there’s been a shift and I’ve seen it most prominently in the last 12 months, and that’s after a 40-year career.”

Actress Cybill Shepherd agrees that progress is being made for women in the film industry. “I started working, like 25 years ago, with the Motion Picture Academy trying to get more diversity. And that has really started to happen now.”

Shepherd plays the lead role in the film, Rose, featured during the Sedona festival. “It’s an incredibly moving story about a woman who lost her husband a few years ago and is diagnosed with a very serious disease, which is going to limit her time alive, and she takes off for an adventure [across the Southwest], in a wheelchair,” said Shepherd. Her character is an ex-cop who finds love when she meets Max, a cowboy played by James Brolin.

“We wanted to have an opportunity to show a strong woman in a strong situation, dealing with life and love and loss and all of those things,” said Rose producer Greg Clonts. “That’s one reason why Rose was so important to us.”

Two other older women, played by Pam Grier and Cindy Pickett, are also prominent characters in the film. Director and screenwriter Rod McCall says he believes there’s positive change in how Hollywood is viewing women, and also older Americans.

“We’re such a huge population block. Hollywood has to tell stories using that generation, their ideas, their passions,” said McCall. “We’re the generation that just never grows old. It’s about touching those things, touching those emotions, remembering way back when we would all protest and do all that stuff that we did. And bring that back with love and with a relationship with two people of the same age and just realize those emotions, those old-time emotions.”

Sedona International Film Festival Executive Director Pat Schweiss says the depth, quality and diversity of the films tapped into many important subjects, while providing great entertainment. “We consistently heard from both filmmakers and audience members that the experience in the theaters, at the events and throughout the town was remarkable. It was a great way to lead into next year’s festival, our silver anniversary.” FBN

Executive Producer Gale Anne Hurd tells the story of the first woman to lead the Cherokee Nation. Her documentary, Mankiller, airs in March on PBS stations in honor of Women’s History Month.

NAU: An Investment That Pays the Best Interest
Inspired by Space, Sports, Science