You are here: Home / Sedona / Lisa Dahl Does it Again as Butterfly Burger Takes Off 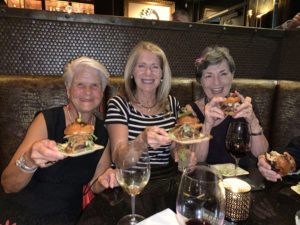 She has taken the burger to a whole new dimension,” exclaimed Diane Lange of Sedona after savoring Chef Lisa Dahl’s Gringo Burger. “It’s the freshness mixed with special herbs and spices that make it unique and cosmopolitan.”

The all-natural, certified Black Angus creation with white aged cheddar and Louis remoulade on a bed of shredded romaine and crispy onion strings served on an artisan bun and topped with a sweet baby gherkin pickle was the Scottsdale Burger Battle People’s Choice Winner in 2016. The Gringo Burger also was one of many crowd-pleasers served at the Butterfly Burger VIP Grand Opening Party in the Village of Oak Creek on Wednesday, Sept. 18.

Mark McClune, sports reporter and anchor for Phoenix television stations CBS 5 and 3TV, praised the Oui Oui Monsieur! “It’s the best patty melt I’ve ever had. From the herbs to the bread to the cheese, everything is blended so perfectly. I can’t imagine going anywhere else from now on.”

“A great burger is like a metaphor of culinary perfection,” said Dahl. “Every single layer matters. For me, it’s about taking each ingredient and giving it its own personality to achieve the OMG effect.”

“The success at these competitions was very encouraging to Chef Dahl,” said Butterfly Burger Social Media Manager Eric Nguyen, “especially because at the time she wasn’t offering gourmet burgers at any of her restaurants.”

Dahl introduced fine dining to Sedona in the late ‘90s with the opening of Dahl & Di Luca, which continues to draw national attention, and has since expanded to become the largest restaurant group in the area with accolades spanning the culinary spectrum. Today, her Dahl Restaurant Group also owns and operates the highly acclaimed Cucina Rustica, Pisa Lisa and Mariposa Latin Inspired Grill.

“Lisa has been using us for her organic fruits and vegetables since her first restaurant, Dahl & Di Luca,” said Bob McClendon of McClendon’s Select Organic Farm in the Salt River Valley. “She is very passionate about what she cooks with and very particular about quality dining and using local produce. It’s what she stands for and what she’s delivering.”

“I believe my reputation as a ‘burger master’ came about because I take every detail of creating my tantalizing burgers as very serious business,” she said. “It doesn’t matter if it’s a roasted beet or a gourmet burger, I think of burgers as its own art form. I believe in customizing the special seasoning and sauces for each to shine on its own. From slow-cooked caramelized onions, sultry sauces and a good aged cheese, I live for combinations that bring the robust flavors out in every bite.”

The 2,500-square-foot, ultra-luxe Butterfly Burger restaurant was designed by Dahl to embody a chic, high-end lounge with dark mushroom-wood-lined walls, exotic faux alligator-like booths, an open-display kitchen and a sleek, marble bar with a rolling library ladder for easy access to the connoisseur-level selection of 40 bourbons and spirits on display.

Butterfly Burger is located within Sedona Vista Village, a redevelopment project currently underway by Martin Aronson, who is transforming the former outlet center into a mixed-use destination with restaurants, retail and a new 120-room hotel, Element by Westin. Dahl says this will be the flagship location for the Butterfly Burger concept, which she hopes to expand beyond Northern Arizona.

“As the gateway to Sedona, The Village of Oak Creek is long overdue for a culinary scene of its own,” said Dahl. “I opened Cucina Rustica in The Village 16 years ago and it was the only fine-dining option in the area. Today, Cucina is busier than ever and I have no doubt Butterfly Burger will thrive in this community and make a name for itself nationally.”

Dahl is one of the country’s leading female chefs and restaurateurs who has pioneered the culinary scene in Sedona for more than 20 years. A James Beard House-featured chef and completely self-taught, she is widely credited for Sedona’s emergence as a national “foodie destination.”

Recently honored with the “Best Chefs of America Hall of Fame Award” by National Elite, a national restaurant industry organization, Dahl also was named “Top Chef” in 2018, the most prized honor by The Foodist Awards, Arizona’s most prestigious culinary award presented by the Arizona Restaurant Association.

Butterfly Burger, at 6657 State Route 179 B1, is now open for lunch and dinner daily from 11:30 a.m. to 10 p.m. Along with gourmet burgers, the restaurant is home to a dozen signature sauces, which Dahl plans to roll out in specialty grocery stores.