By FBN on February 6, 2020 in Business Calendar 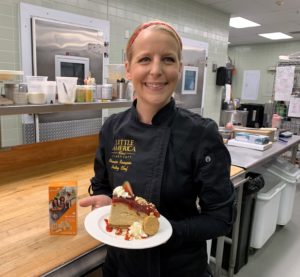 This is the fourth year Little America and Ronspies have accepted the Girl Scout Cookie Dessert Challenge and come up with an even more decadent way to enjoy Thin Mints, Samoas and Savanah Smiles, as if we needed encouragement.

And just like peanut butter was meant for jelly, Ronspies was destined to be a chef and also a Girl Scout. “I’ve always loved to cook,” she said. “I used to get up early and make breakfast for everyone.”

“Everyone” was her parents and two younger sisters in Park City, Utah. “And then I’d get in trouble because I’d leave a mess.”

Ronspies grew up in scouting. She was a Daisy, a Brownie, a Junior and Senior Girl Scout, and a camp counselor. Her mom was a day camp director in Park City and neighboring communities where she and her sisters would help out, sleeping in Girl Scout buildings, doing crafts, playing games and practicing first aid.

Later, she attended the Art Institute of Dallas and studied culinary management. She has worked in kitchens for 15 years, eight as a chef.

She explains that Arizona restaurants that join the friendly dessert competition must choose their cookie in December. It’s a busy time for chefs during the holidays, but Ronspies loves the added pressure. “It’s really fun. I think better under pressure and I can use the parties to experiment with desserts.”

Last year, she created the Savanah Smiles Lemon Cheesecake. “It went over well with our guests. It was the best one we’ve made.”

Three years ago, she chose Samoas – caramel, chocolate, coconut cookies – for her Ricotta and Orange Mousse. “This was kind of like cannoli and tiramisu with crunched Samoas on top. It was complicated and the least popular of all. I think I over-achieved.”

If you break down this year’s Peanut Butter and Jelly Cheesecake, it’s not as odd as it sounds. The strawberry jelly on top works amazingly well with the fluffy, mild peanut buttery cheesecake and the Do-si-dos cookie crust. In fact, research shows it’s absolutely delicious and can be split up over two breakfasts, if you’re a researcher who likes that sort of thing.

“At first, it sounds kind of weird, but it’s really good,” Ronspies said. “We tried it with our staff and everybody liked it – it reminds people of eating peanut butter and jelly sandwiches when they were kids.”

The Girl Scout Cookie Dessert competition lasts for the month of February. The winner is determined by how many desserts are sold. For every $8 Peanut Butter and Jelly Cheesecake ordered in Little America’s Silver Pine Restaurant and Bar, $1 goes to Girl Scouts to cover travel costs, pay for gear and provide experiences.

“We feel having organizations like the Girl Scouts is very important for our youth and we take a lot of pride in assisting in any way we can,” said Little America General Manager Fred Reese. “Pastry Chef Vanessa Ronspies enjoys being able to give back to an organization that had such a positive impact on her life.

“Being involved in Girl Scouts has given me more confidence to try new things that I probably wouldn’t have done otherwise,” said Ronspies.

The proof is in the pudding, so they say, or perhaps the peanut butter and jelly cheesecake. FBN