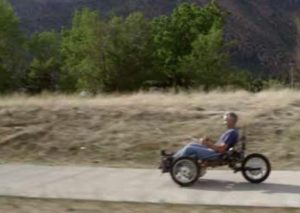 Flagstaff inventor and serial entrepreneur David Calley wants to change the way we get around town on our daily commutes. He has designed a new kind of vehicle that is something between an electric car and an electric bicycle. He calls it Planet Rider and expects it will be on the streets of Flagstaff sometime next year.

“It looks and moves like nothing you’ve been in before,” said Calley, the founder of Southwest Windpower and Electric Torque Machines. “There are three wheels – two in the front, one in the back – it’s about the size and weight of a scooter, the width of a wheelchair and is much easier to get into and out of than a car. It will go indoors anywhere a wheelchair will go and is highly maneuverable; it pivots within its own dimensions.”

Planet Rider is designed to travel on bike paths, dirt roads, even highways. It transforms as it speeds up, becoming lower, more aerodynamic and more stable. It can go 65 miles an hour.

Calley developed Planet Rider to solve several problems. One is getting enough exercise. Drivers will have the option to pedal it and thus receive aerobic benefits. There’s also the concern about parking. Planet Rider will not take the space that a car needs on crowded highways and in parking lots. In fact, he says it will fit in an office cubicle. Another challenge is the cost of owning and driving a car.

“A car, an economical car, costs over 60 cents a mile to operate,” he said. “If you drive more than 9,000 miles a year, that will cost you $55 a day. The cost of transportation for those in the lower income brackets is crushing.”

Calley believes once people try Planet Rider, they won’t want to go back to driving a car to get from point A to point B on a regular basis. “It will be like taking a semi to work. It will get you there, but where do you park it?”

Planet Rider has safety features built in, as well. It stands about the height of a person, so it can be seen in traffic. The entire vehicle lights up, so it is very visible at night. The driver has a seatbelt, unlike a bike or a motorcycle. And it will come with an all-wheel drive option, he says. It also protects the driver from weather. “It’s enclosed with a two-inch thick material that will not break. The shell is very strong and designed to absorb an enormous amount of energy.”

Currently, Planet Rider is in the development stage. When it goes into production, Calley expects it will initially cost around $7,000, but will level out around $2,000.

To hear more from Calley about his invention and potential new ride of the future, tune into FBN’s podcast, On the Grid, at FlagstaffBusinessNews.com. FBN