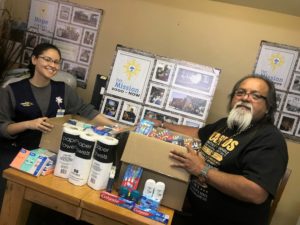 The Westside Walmart in Flagstaff is serious about fighting hunger in its neighborhood.

The store and its associates are just finishing up a five-month campaign, “Fight Hunger Spark Change,” and were able to provide 35,994 meals for the local food banks, according to Jennifer Foster, the store’s manager.

Along with Walmart’s partner, Sam’s Club, they teamed up with Feeding America, and were able to get the community involved by featuring items as “hunger fighters” for the duration of the drive. Every featured item purchased would count toward meals for the food bank.

“As far as the store fighting hunger, we were able to make sure that features around the store were the most beneficial to raise money,” Foster said.

For instance, if a certain cereal was designated, customers would pitch in and buy the item to help bring the total higher.

There were multiple items throughout each week.

“The more we talked about it, the more the customers were willing to purchase those certain items to support the local food bank,” she said.

The campaign, from April to September, resulted in early 36,000 meals for the Sunshine Rescue Mission and St. Mary’s Food Bank.

“A lot of people think Flagstaff is an amazing place to live – and it is, but we have a lot of transients and homeless that come through, especially during the summer months,” she said.

In addition, there are families and seniors who struggle to make ends meet. Statistics show that 14% of the state’s population does not get enough to eat. That translates to 979,000 people in Arizona.

Foster says because the need is so great, Walmart doesn’t stop helping when a food drive ends. Each week, the company donates surplus produce and other perishables, and clothing. This year alone, the donations have added up to nearly $34,000.

“I don’t think people realize what a big heart Walmart has,” Foster said. “We like to keep ourselves out in the community.” FBN