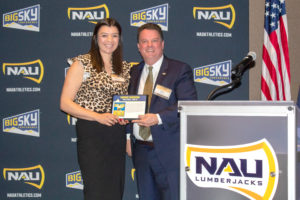 People find inspiration from a variety of sources. For Maggie Barrera, it came from being told she wasn’t good – at playing volleyball, that is. She worked hard and ultimately proved her doubters wrong, turning herself into an outstanding player and one of Northern Arizona University’s most decorated volleyball players ever.

Barrera grew up in Salinas, California, 20 miles northeast of Monterey. She played a lot of basketball and at one point decided she would eventually go to college to play the sport. Then, in her sophomore year at North Salinas High School, one of her best friends convinced her to try out for the volleyball team. Barrera wasn’t interested at first. She laughed about this in a recent interview, saying, “I didn’t want to wear the Spandex shorts they had!”

Her friend nevertheless convinced her to give the game a try and Barrera agreed. Despite never playing volleyball before, she ended up making the junior varsity team. That first experience wasn’t much fun, however. “I was horrible, just horrible. I couldn’t even serve over the net. I don’t even know why they chose me, maybe because I was tall.” She had grown to six feet tall that year (and hasn’t grown since).

Barrera’s teammates were quite open about her skill at volleyball. “They would ask me why I was playing because I was no good.”

Rather than quitting in the face of such antagonism, she stuck with it to prove a point. “I knew inside that I wasn’t very good but I didn’t want what they said to affect me, so I worked harder to make it to where I became good. I just wanted to prove them wrong, I guess.”

And prove them wrong she did. Halfway through her junior year she gave up basketball so she could focus on volleyball year-round. With the help of her high school coach, she began traveling to San Jose to practice against tougher competition. The hard work payed off and she received scholarship offers to play in college. She chose NAU over Kansas State University because it was closer to home.

Her first year at NAU was challenging because she was homesick. She was also shy and nervous at first. “I don’t think in the first semester I even spoke.”

She gradually became more comfortable, largely because of the family-like atmosphere of the volleyball team. She was named a starter her freshman year and would remain so for her entire NAU career.

But she didn’t just start; she excelled. She was selected to the All-Big-Sky-Conference team for three years and was the first player to be named Most Valuable Player of both the Big Sky Conference Regular Season and Tournament. In 1999, she led NAU to its first Big Sky Conference championship and appearance in the NCAA Tournament. She was named the 2000-2001 NAU Female Athlete of the Year and has been inducted into the university’s sport hall of fame twice – as an individual player and as a member of the 1999 conference championship team.

To achieve this success, Barrera spent the majority of her time in volleyball-related activities – practice, weight training, scouting upcoming opponents, traveling to compete – but she did find a little time beyond this and studying to spend with friends. Favorite hangouts included Mike and Rhonda’s, Granny’s Closet and Oregano’s. She also enjoyed hiking in nearby forests and playing Frisbee golf.

After graduating from NAU in 2003, she interned with the Monterey County Health Department and then taught high school health and physical education for four years. She then returned to the health department and has worked there ever since.

Her husband of less than two years recently passed away, but she is grateful he was able to see her NAU Hall of Fame induction (as a player) this past September. Through all this, volleyball remains a central part of her life. She is now in her 16th year of coaching at her high school alma mater and continues to prove those long-ago doubters wrong. FBN