You are here: Home / Business / Making a Business of Snow Play 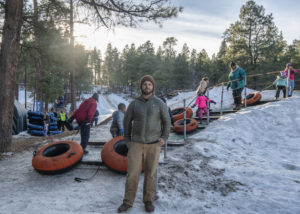 Between bouts of laughter and the swish of snow tubes cruising down powder-packed slopes, comments such as “best day ever” can be heard at Flagstaff Snow Park.

On the hills at Fort Tuthill, Flagstaff Snow Park is in its fifth season of winter fun, with snowmaking, food trucks, fire pits and a crew of friendly and helpful employees.

“Last year was our first full season with snowmaking,” said Flagstaff Snow Park primary owner Jonathan Allen.  “It was a great season, we had about 60,000 people. This year, we’re dealing with COVID and running at a reduced capacity to limit contact and let people spread out better, but attendance is great.”

Also in response to COVID-19, tickets are sold online and guests’ temperatures are taken before they can enter the park.

“It is so much fun and my kids have a blast,” said local mom and Simply Country Boutique owner, Krista Randall, “especially in a dry winter when we have no snow. It’s great to get out and go tubing with the kids. Even my mother-in-law had a great time, and for the many hours you can spend out there, the price is great.”

Open on holidays, weekends and some evenings, the snow park has six tubing runs and a designated kiddie hill, as well as a “passive” area where visitors can sit and relax and view the action. Snow tubes are provided.

The staff at Flagstaff Snow Park tops off at 40. “On a daily basis, we employ about 20. We cycle through them,” said Allen. “We hire mostly high school and Northern Arizona University [NAU] students.”

The inspiration for Flagstaff Snow Park was spurred by Allen in 2011. “I moved out to Highway 180 and the traffic was horrible in the wintertime. I’d see cars parked bumper to bumper and people sledding on the side of the road. The City of Flagstaff put out a bid for a snow play area on McMillan Mesa but it fell through. I was disappointed, which is part of why I responded to the 2016 Coconino County RFP [request for proposal] for snow play at Fort Tuthill. We wanted to make sure it came to fruition.”

“Flagstaff Snow Park is a valued partner of Coconino County. They help people create wonderful experiences that are valued in a year such as this one,” said Coconino County Parks and Recreation Director Cynthia Nemeth. “Through consultation with the county’s Parks and Recreation and Health and Human Services departments, the Flagstaff Snow Park put together an operational plan that addresses COVID-19 protocols and includes online sales, social distancing, decreased capacity, required facemasks and increased cleaning of common-use areas.”

“Our first season was really good. We did about 19,000 ticket sales using natural snowfall,” said Allen. “But, the following year was really dry, we only opened for five days.”

Allen says at that point, they went back to the county board and explained that they needed snowmaking capabilities to make the operation viable. After going through the approval process, the owners put in a water line, which also will be used for the campground in the summer.

Food trucks top off the Flagstaff Snow Park experience. “We looked at doing our own food,” said Crane. “But, honestly, we thought, ‘How can we involve people in our community?’ and we came up with the idea of food trucks. This was awesome because food trucks don’t typically do well in the winter.” Currently, food vendors include 3’s in the Trees, Square Root Burger, Momma Kneads Dough, Lou Dawgs and Single Speed Coffee Roasters.

“Business has been great,” said Single Speed Coffee Owner Brad Richmann. “It’s been a huge blessing to work in the wintertime in the restaurant. Super appreciative of the ability to work there and those guys providing work for us and excited that people are still coming out without snow. They have invested money to enhance the park and make light in a dark situation.”

According to a 2019 study conducted by the Economic Policy Institute at NAU’s W.A. Franke College of Business, the overall contribution of Flagstaff Snow Park’s operations is more than $5 million to the local economy. FBN