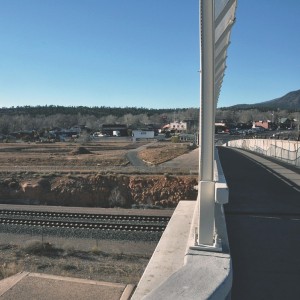 Residents and visitors in Flagstaff may not be able to help but notice the earth-moving equipment and chain-link fence adorned with big signs at the intersection of Route 66 and Fourth Street.

Under the shadow of the Fourth Street bridge, The Trax is a high-profile project owned by Evergreen Development. It is expected to bring retail businesses and office space to the 33-acre space between Arrowhead Ave. and Postal Blvd.

“This market is healthy and growing,” said Evergreen spokesperson Tim O’Neil. “Goals that seemed overly ambitious 12 months ago will materialize in the form of retail, hospitality and office construction over the next 12 months. New jobs, services and amenities are on the way to Trax, and we are thrilled to be part of this dynamic community.”

One of the key aspects of The Trax is its location, between Route 66 and I-40, a major transportation corridor through Arizona, connecting California and New Mexico and serving an overall trade area of 250,000 people.

Locally, the development is expected to serve as an anchor point for Flagstaff’s eastside residents and revitalize the Fourth Street Corridor by drawing shoppers from nearby communities.

“It is exciting to see The Trax development progressing,” said City of Flagstaff Economic Development Sales and Marketing Specialist Gail Jackson. “Sportsman’s Warehouse [which sells hunting, fishing and camping gear] is the first retail store to break ground in The Trax and is slated to open this summer.”

“The City of Flagstaff has made us feel like valued partners from the very beginning, and we look forward to making a meaningful contribution to the ‘new’ Fourth Street Corridor,” said O’Neil.

Last May, the City of Flagstaff’s Planning and Zoning Commission approved an amendment to the Flagstaff Regional Plan to change the land use designation for the development area from office-business park, light industrial and light-medium industrial use to a community-regional commercial designation.

Along with new restaurants, hotels, shopping, convenience stores and gas stations, community benefits will include a segment of the Flagstaff Urban Trail (FUTS) that is planned for construction along the back of the new shopping center, along with a new pedestrian sidewalk system and lighting along Route 66 and Fourth Streets. This, according to published notes from a March City of Flagstaff City Council meeting.

“We look forward to the many benefits of new jobs and retail options that Trax will bring to Flagstaff and its residents,” said Jackson. “These new retail options will diversify the existing retail market and increase the tax base.” FBN

The Entrepreneur Rollercoaster: Defining Your Ticket to Ride
Options for Energy-Saving Upgrades in Your Home