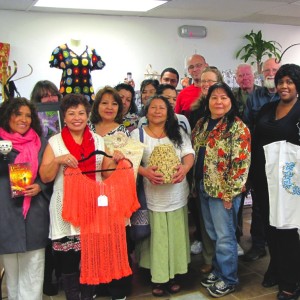 Some dreams make no sense. Under dark of night and beneath closed eyes, apparently random events cascade in unintelligible, albeit entertaining, succession. On the other hand, there are wide-eyed dreams that, while brazenly imaginative, are coolly calculated and strategically executed – those of Martin Luther King, Jr., for example. That sort of dream benefits from mental and physical endurance, though often succeeds on a good dose of dumb luck.

The Mercado de los Sueños (or Market of Dreams) – the Sunnyside Neighborhood Association’s (SNA) recently opened micro-business incubator and cultural crossroads – suggests both kinds of dreaming. Spend a few minutes in the Market of Dreams and you are as likely to encounter an unprecedented miracle as you are the outcome of intentional action. For that matter, just one foot inside the Market’s front door will land you on a dream come true. The ceramic tile gracing 1,300 square feet of flooring is the accidental but fortuitous convergence of wishful thinking and determined effort, and preserves a high point of building preparations just prior to the Market’s February opening.

Tile setters Gerardo Vidal and Eugenio Urbina, in the course of a chance interaction with Coral Evans, offered to donate their time and talent if she would secure the tile. Evans, SNA’s executive director and a driving force behind the Market of Dreams, but nonetheless tile-less, took immediately to Facebook. Almost as quickly, the local community answered. From two or three spare pieces left by overnight tile fairies, to the goodwill contribution of entire pallets from DalTile and Carpets of Dalton, ceramic tiles fell upon the Market like loaves from heaven. Well before Urbina and Vidal grouted their last lines, the Market’s floor surpassed Evans’s wildest dreams. The two had troubled over time-consuming cut-outs and intricate inlays in forming patterns of a Las Vegas-styled Roulette table and a radiating sun. “I couldn’t believe it,” Evans said. “They could have just laid the tiles. But they really took ownership.”

This synergistic combination of eager artisans and local resources captured an important aspect of the Market’s mission even prior to its official opening – that of fostering community collaboration. Contractor Jeff Knorr amplified this symphonic note by volunteering considerable time and expertise in overseeing the building renovations. With the additional generosity of nearby businesses and help from prospective market members, youth groups and supportive neighbors, the Market has at last fulfilled a five-year dream of its own: A facility for housing its grass-roots, micro-business center.

The Market of Dreams is in many ways an ambitious elaboration of the momentum harnessed by the SNA’s tremendously successful Weed & Seed Program, a community-based initiative that made impressive strides in its 12-year run at uprooting social deviance while beautifying the Sunnyside landscape. When Weed & Seed funding wilted in 2011, SNA began to address the seemingly intractable poverty endemic to its neighborhood. Looking for a bright spot on a bleak economic canvass, attention turned toward the numerable cottage industries already conducting some type of informal business in Sunnyside.

SNA partnered with the Northern Arizona Center for Entrepreneurship and Technology (NACET) to conduct an analysis of the neighborhood’s economic privations, as well as its promise. The study determined Sunnyside stood to benefit from a small-business birthing center, of sorts. An economic conference sponsored by NAU’s Program for Community, Culture and the Environment (PCCE) provided an opportunity to consider various means of diversifying the local economy. That is when Evans was introduced to Patrick Pfeifer, and the visionary dreaming grew a sturdy set of legs. In the fall of 2013, Pfeifer began work in a PCCE-funded position dedicated to awakening the Market of Dreams to its reality.

Standing at the northeast corner of the East 7th Avenue and Fourth Street intersection, the entrance to the Market of Dreams is hidden around the backside of the building. But that has not deterred people from finding it. The Market is well on its way to serving as a springboard for entrepreneurial enterprise, providing essential classes in business basics; mentorship from proven entrepreneurs; access to complementary agencies; and physical infrastructure, including shared office space and equipment. Besides offering these building blocks of micro-business, the Market’s mission encompasses developing community leadership while promoting civic engagement; steering area youth toward entrepreneurial entrance ramps; contributing to the revitalization of the Fourth Street corridor; and maintaining a storefront for the sale of locally-originating products and food.

Barbara O’Keefe has named her business Tattered Chic Designs, and branded herself a “hipster chic-ster.” She offers one-of-a-kind, handmade creations that smartly meld a variety of repurposed fabrics and jewelry, among other items, into a unified whole, meant to “evoke nostalgia, romance and beauty.” Petra Rivera expertly crochets fine, colorful yarns into delicate overlay garments, sweaters and scarves certain to add warmth and elegance to a woman’s wardrobe. Rivera also teaches an hour crochet class on some Saturdays at the Market. For $5, participants can learn the basics of the crochet craft.

Weekend visitors to the Market will also discover opportunity for instruction in Mayan basket weaving from Marina Xoc Vasquez. Vasquez’s knowledge of traditional Guatemalan culture, in this instance, of medicinal plants, has also found its way into a variety of plant-based salves and ointments she has for sale. Brandon Billings has taken plants in a different direction as one of the Market’s first purveyors of edible products. Though Billings has marketed his Dirty Birds Spices over the Internet, participation in the cooperative offers him a distinct advantage. “I have much better interaction with customers here than I ever could online. I get true feedback.”

Early indications suggest a promising growth curve. In a month’s time, the Market’s retail shop has increased operating hours from two to four days, Thursday through Sunday. Projections include adding a fifth and sixth day. Nearly two dozen vendors have paid a monthly membership in exchange for shelf space. As stakeholders in a cooperative business, members also volunteer at least three hours each week at the Market. They might be caught periodically pinching themselves, wondering if it is really real. FBN

One Response to Market of Dreams Awakening to Promising Reality