By FBN on April 6, 2015 in Community Profile, FBN Spotlight 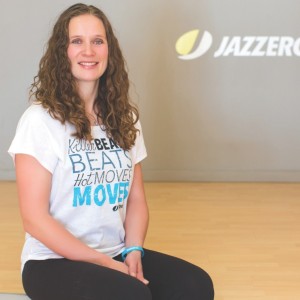 There is one thing Mirjam Loverich wants everyone to know about: Jazzercise.

“I think people associate it with the 1980s,” she said. “This is not your mama’s workout with leotards and leg warmers. That has all gone away.”

Things have changed a lot since then.

“You think you know us, but you don’t. It’s very modern,” she said. It is a beat pumping dance party, a workout that gets you results,” said Loverich, the owner of Jazzercise Flagstaff Fitness Center.

She says 800 calories can be burned in a single session.

This month, the business celebrates its second anniversary with special classes and an open invitation for a free class to try it out. There will be special classes on April 17 and 18 at 6 p.m. On that Friday night, a fusion/hip hop class will be held. It will feature Top 40 music and a circuit class with tubes, weights and the like. Other festivities are also on the schedule.

“It’s such a fun environment,” she said. “People appreciate that it is fun. You get a workout and can be part of the community.”

Loverich said Jazzercise works constantly to keep itself fresh by coming up with new routines using new music. “They added new formats and new dance mixes. We also have kick boxing and fusion, which is like circuit training,” she said. “The hour goes away so quick because you have a lot of fun.”

And it is something a person can do year-round, even when the snow flies. The center now offers 33 classes a week at all different times. The team of teachers is diverse. Their ages range from the 20s to the 50s.

Loverich got interested in Jazzercise after she married her husband, Joe, in 2005. She says she started gaining weight and did not enjoy running in the high elevation of Flagstaff, so she started looking for other methods. She found the downtown location of Jazzercise and started dancing.

As time passed, the Jazzercise businesses where she exercised closed. Eventually, Loverich began teaching classes in a local church space. “I opened three early morning classes a week,” she said.

Her clientele gradually increased. When another class site closed its doors, its members joined her. “We merged those classes and had 15 classes,” she said.

Loverich now has about 130 students.

At the end of 2012, she started looking for a space to open a center, which turned out to be at 1804 on East Route 66 at the Village Center Plaza.

She says membership “skyrocketed” when the doors of the center opened two years ago.

Now there are regular specialty classes that include strength and cardio training with special attention to the torso.

Another perk of the center is aimed at parents, who can drop off the kids at Kingdom Kids next door for a dollar per child per hour while they exercise. FBN

To learn more about Jazzercise Flagstaff Fitness, visit their facebook page or call 928-853-9968.