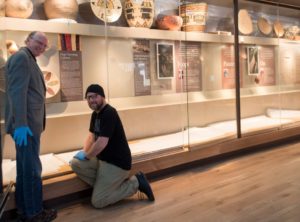 The world’s largest museum exhibition design firm has called the Museum of Northern Arizona’s approach to the curation of their Native Peoples of the Colorado Plateau renovation “revolutionary.” Ralph Appelbaum Associates design firm, with offices in New York City, London, Beijing, Berlin, Moscow and Dubai, should know. The firm worked closely with MNA and 42 members of Colorado Plateau tribes to determine the exhibition’s themes and select the 342 items displayed.

MNA’s inclusive approach is deemed revolutionary by the firm, best known for its work at the United States Holocaust Memorial Museum, because the process of collaboration with tribal representatives reflects a change in curatorial approach over the last decades.

“The process that we have chosen is a more time-consuming process, but we’ve ended up with an exhibition that truly reflects the diversity and complexities and of the Colorado Plateau tribal communities,” explained MNA CEO Carrie Heinonen. “There is very little curatorial voice; the voice that you hear is the voice of the communities represented.”

The project – the first major renovation of the museum’s Native American exhibition in nearly 40 years – has been in the works for longer than the three years that Heinonen has headed the museum. “We’ve been working in earnest with these [tribal] consultants for probably two to two and a half years,” she said.

“Over the past 38 years, the approach to this type of exhibition has changed significantly, with much more involvement from the source communities,” MNA President Emeritus Robert Breunig detailed in a press release. This is the second time that Breunig has led the gallery installation. He curated the previous exhibit in 1980. “Tribal communities were asked what they wanted the public to know about them, and so this exhibition their stories, their values and their way of presenting themselves in the modern world,” he said.

The collaboration between MNA curators and the tribal representatives ensures that the gallery not only illuminates, but also respects the people and cultures it explores, and the spiritual importance of the traditions shared.

“For us, tribal knowledge is sacred, and much of it cannot be shared with everyone,” said Ophelia Watahomigie-Corliss, a Havasupai council member who helped create the exhibition. “Traditional knowledge is taught by our elders and given when one is ready. Parts can only be known by specially prepared individuals. Here, we are sharing knowledge that we are comfortable giving to the world.”

The materials in the gallery are from the 10 tribes that have called the Colorado Plateau home for centuries. Tribal consultants from the Acoma, Dilzhe’e Apache, Diné (Navajo), Havasupai, Hopi, Hualapai, Southern Paiute, Southern Ute, Yavapai and Zuni communities developed the educational content that put the objects and photographs into historical and cultural context. Items in the displays run the gamut from weavings, pottery and fine silverwork to toys, tools and even a skateboard.

“We’re including three times the number of objects previously shown, and we’re adding interactive elements that illustrate how different tribes experience different themes such as celebrations, adornment, food and toys and games. That element of interactivity will be something that is new for this exhibit,” said Heinonen. She explained that a large audiovisual welcome screen will project images of Native people speaking indigenous languages to greet visitors. It is part of RAA’s design that showcases the rich and distinctive heritage of each community while exploring shared themes that transcend tribal lines.

“We do hope that [the new exhibit] will attract many Native communities as well as the general population and visitors. We are hoping that those communities will bring their youth and bring their elders because this is a starting place to learn about the communities and hear, ‘We are still here.’ It is a message that needs to be heard,” emphasized Heinonen. The CEO described how visitors who come from Europe and other places across the world are surprised to find that there are Native people living among the general populations in Northern Arizona.

“The audience for this exhibition is not just the typical museum visitor; this is an exhibition seen by our tribal consultants as a tool for teaching their own youth about their culture, and a means of reinforcing cultural pride,” said Heinonen.

“We will be better equipped to share the many messages that come from the tribal communities. Those messages on how we can navigate today’s complex world are valuable to us,” Heinonen added.

MNA has many opportunities for Flagstaff businesses to partner with the museum’s mission including sponsorships, Thirsty Thursdays after-hours, research and education. “If someone has an area of interest, we probably have a project to support that. That represents a lot of opportunities for people to support a local organization,” said Heinonen about the institute that will be celebrating its 90th anniversary in the fall.

The exhibition opens to the tribal communities on April 14. Its public opening is Sunday, April 15. FBN

Tips for Families Who Have Children with Special Needs
Defining Arthroscopic, Laparoscopic, Endoscopic