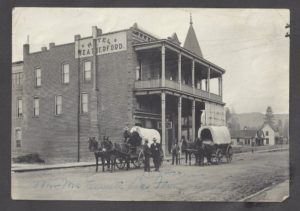 One of the joys of a building that reaches back to Flagstaff’s earliest beginnings is uncovering pieces of the past. Once in a while, a guest enters the historic Weatherford Hotel with an old photograph and a story that transports us to the Old West.

Jeff Dumas visited recently with this picture from the year 1900 or so. His aunt, Martha Bunger of Prescott, was born in Flagstaff in 1922. The photo was part of her mother’s collection. Lenore Francis was born in Flagstaff in 1988. In the picture is Lenore’s father, Coconino County Sheriff John Francis, the gentleman standing in the foreground on the left, in front of the first covered wagon.

Sheriff Francis was the county’s first sheriff. He married Nellie Beale, a member of one of Flagstaff’s first families who was reportedly “the belle of the little frontier town.” But perhaps the most colorful role Sheriff Francis played in the Arizona Territory was his part in the bloody Pleasant Valley War.

Within a month of his July 25, 1887 wedding, Francis rode off to help lawmen in Apache County restore order to the open range. The Pleasant Valley War was an ongoing feud between two ranching families, the cattle-herding Grahams and the sheep-herding Tewksburys. Although Pleasant Valley is in Gila County, some of the bloodiest battles occurred near Holbrook.

In those days, cattlemen and sheepherders generally didn’t get along. In this case, the Grahams blamed the Tewksburys for allowing their sheep to graze until the land was completely stripped of vegetation, leaving nothing for the cattle to eat. There were also accusations of cattle rustling. Other settlers in the area were also upset about seeing sheep on the landscape.

The conflict lasted about 10 years, but escalated between 1886 and 1887, and eventually involved cattlemen associations, sheepmen, hired guns, cowboys and lawmen. An estimated 35 to 50 people were killed, including almost all the males of the two families. Historians say it the reason Arizona’s statehood was delayed for a decade.

Lawmen, such as Francis, who participated in ending the range war became heroes. The popular Coconino County sheriff was re-elected several times. He also served as a deputy U.S. marshal and later became Flagstaff’s mayor.

Sheriff Francis also made the news when he purchased one of Flagstaff’s early automobiles. A 1911 article, reprinted by the Arizona Daily Sun in 2011, stated, “With horses, fleet-footed deputies, railroad cars and the auto, the law buster will have an exceedingly annoying time in Coconino County hereafter.”

At the Weatherford Hotel, we value Arizona’s heritage and strive to maintain the historic building for all to enjoy. We also appreciate the individuals, like Jeff Dumas, who share their connection to this downtown landmark. By the way, also in the historic photo is the sheriff’s house, located on Leroux and Aspen, just across the street from the hotel and a likely deterrent to unruly behavior in the establishment!

This year, we’re thrilled to report another step in the hotel’s restoration has been completed. If you haven’t visited for a while, you’ll notice the changes to the lobby with the ceiling restored to its original two-story height along with the beautiful wood-crafted, wider staircase.

The holidays are a perfect time to feel the magic of the Weatherford and the many stories it has to tell. We invite you to bask in the festive atmosphere and relax among the casual elegance of Charly’s Pub & Grill after a busy day of shopping. As always, we thank you for your support of our restoration efforts! FBN

Henry Taylor and Sam Green Taylor are the owners of the Weatherford Hotel in the heart of downtown Flagstaff, where the Northland comes home to celebrate! For more information, visit weatherfordhotel.com

ARIZONA IS NOW OPEN FOR SKIING!
Lumberjacks Giving Thanks