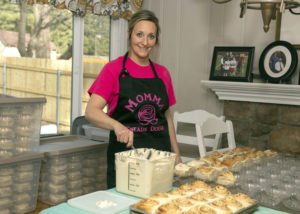 Sara Clouse’s cinnamon rolls have made the rounds. They’ve been gifts for friends, neighbors and teachers. They’ve shown up at bake sales to support youth sports. And they’ve even brought in $1,500 at a local fundraiser. Now, everyone can enjoy them from Clouse’s business, Momma Kneads Dough.

“Since I was a little girl, my mom and I would bake together. It was a tradition,” said Clouse. “Everyone loved her cinnamon rolls, but she never sold them.”

Clouse carried on her mother’s love for baking and then got to thinking,
“I could do this as a full-time job!”

So she quit her job, amped up her oven, converted her kitchen and Momma Kneads Dough came to fruition.

“I’ve known Sara since she was born and her mom and I were really good friends,” said local businesswoman Mary Freer. “Sara is a model of her mother. They are hard workers, give a lot to charity and do a lot for people. I’m thrilled that her business has done so well. Her cinnamon rolls are the best, her secret ingredients shine through the love she has for baking. I buy them for friends, workers and myself.”

Interestingly, Clouse does not use her mother’s recipe. “My grandfather was a beekeeper so my mom used honey in her cinnamon rolls. I took a recipe that my sister-in-law was using and combined that recipe with my mom’s. It took a lot of trial and error,” she said.

Momma Kneads Dough currently is selling cinnamon rolls and other treats out of her food truck at Flagstaff Snow Park. “I knew the park was opening so I called them and asked if I could sell my cinnamon rolls. The owner said, ‘Yes, as long as you can mass-produce.’ At the time, I didn’t know how I could do it, but I knew I’d figure out a way to do something I love, which is baking.”

Along with her husband, Josh, Clouse found a food truck in Casa Grande. “We did a lot of work to conform it to our needs and style. We painted it, rearranged the sink, and installed a bigger counter space for coffee and hot water,” said Clouse.

Concurrently with the Snow Park, Clouse also sells her cinnamon rolls on her Facebook page, for weddings and corporate events, and recently participated in a Toys for Tots drive paid for by Shafor Realty and CNN Mortgage. “Anyone who donated a toy would get a cinnamon roll,” said Clouse.

“Sara is doing great and she kills it,” said 3’s in the Trees owner Augie Herring. “Her cinnamon rolls are fantastic. My favorite is the frosting. My customers comment on her rolls all the time.”

On holidays and special events, Momma Kneads Dough whips up 120 dozen or more a day. “I get a lot of people telling me that my cinnamon rolls are the best they’ve tasted. People love the frosting. It’s been suggested that I start shipping but haven’t gotten to that point yet.”