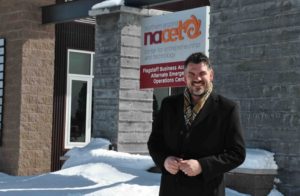 The concept of a launchpad for a moonshot took hold of the nation’s consciousness in 1961 when President John F. Kennedy declared that the United States would focus its energy on sending American astronauts into space with the goal of successfully landing on the moon.

Flagstaff played an important role in launching this dream, serving as a training ground for astronauts, including all the astronauts who landed on the moon who trained from 1963 to 1972 in Northern Arizona.

Continuing in that tradition, the non-profit organization Northern Arizona Center for Entrepreneurship and Technology became a launchpad for small businesses and startups 17 years ago from its base on McMillan Mesa.

The NACET program houses a business incubator and an accelerator in its state-of-the-art facility, which consists of 38,000 square feet with wet labs, suites, offices and manufacturing space.

Moonshot at NACET designed a program for growing business profitability through “scaling,” the development of more products and services or the expansion of market position.

One such community is Lewis County in Washington State, which is located between Seattle and Portland.

“They’re already a client of ours,” Hathcock said. “We also do events for Henderson, Nevada. They went from paying events to long-term agreements.”

Also, staff field a lot of one-off inquiry calls, including calls from Hawaii, Colorado and Oregon.

“They say, ‘I’m interested in doing what you guys are doing.  How does your model work? Can we work with you?’” he recalled.

Startup clients completed a successful year in 2018 where occupancy rates in the NACET incubator and accelerator facilities increased to almost 80 percent.
Four of its companies completed the program and moved to off-campus business sites.

“Moonshot provides entrepreneurs a launching pad to share their ideas in an environment that offers one-on-one support from successful entrepreneurs and industry experts as well as provides business tools for success,” said Heidi Hansen, economic vitality director for the City of Flagstaff.

Hathcock said the program is looking for clients who need help with the three Cs – Connection, Capital and Clients.

“We’re not looking for a business owner who just wants to run a soap shop; we’re looking for people who want to create a soap distribution model to sell soap across the state, across the Western region, across the country and across the world.”

Expansion of the Moonshot at NACET concept outside of Northern Arizona will ultimately benefit Flagstaff, he added.

“The more our network expands, the more investors we come in contact with, the more mentors and coaches, then the more

our own entrepreneurs in Flagstaff [will benefit]. That raises the brain trust that can assist them. It only benefits ourselves, the local community.” FBN

NAU: An Investment That Pays the Best Interest
Hot Stones May Be Your Remedy for Cold March Winds