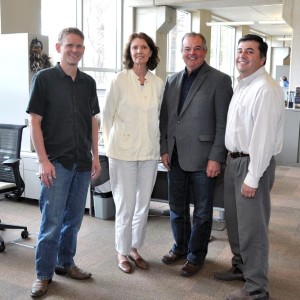 “I think it’s imperative for a state university to be engaged and making a major contribution to the economic health of its state,” said Wayne Fox, assistant dean and director of the Alliance Bank Business Outreach Center (ABBOC) at Northern Arizona University’s W. A. Franke College of Business.

The conference is sponsored by the Center for American Indian Economic Development (CAIED), which was established by the Arizona Legislature in 1985 to serve as an information and resource center for Native tribes and communities. It is located at ABBOC in the ground floor of the Franke College.

“We thought, ‘You know what? It would be a great idea for our tribal community,’” said Nathan Levi Esquerra, program director at CAIED and a member of the Chemehuevi Tribe. “I think our goal with this tribal outreach is to inspire anyone who is interested in working with the tribes and to teach anyone who is interested in learning about tribal impact on the State of Arizona.”

The keynote speaker, “Famous Dave” Anderson, is billed as “America’s Rib King,” who built a multi-million dollar restaurant business chain. Anderson, an Ojibwe tribal member from Wisconsin, also served as assistant secretary for the U.S. Department of Interior in the Bureau of Indian Affairs in Washington, D.C., a presidential appointment that required a full-Senate confirmation. Anderson says his mission is to educate Native American youth on the ins and outs of running a business.

Planning for the April 9 event started before Christmas and was sold out by the third week in March. “We’ve registered close to 10 to 11 tribes,” said Esquerra. “I’m thrilled with it. The feedback we’re getting, I think it shows there’s a need for this kind of conference. I think many residents in Arizona don’t realize the economic impact that tribes have within the state.”

There are 22 federally recognized American Indian tribes in Arizona. Esquerra says these tribes have a significant impact on Arizona, specifically, rural Arizona.

“Arizona tribes are all involved in the tourism industry now, with the hotels, restaurants, conference centers, RV parks, golf course and casinos, and it happened in the last couple decades,” said Cheryl Cothran, director of the Arizona Hospitality Research and Resource Center. “It’s all very recent. That’s why we’re talking about tourism and the tribes; they’re all in it. We know that Arizona American Indian tourism is a destination driver for Arizona. It’s one of the reasons people want to come here.”

She says cultural heritage tourism is directed toward experiencing the arts, the history and the special character of a place. American Indian tribes represent many cultures with different traditions, and visitors to Arizona, including international visitors, want to learn about and experience.

According to the Arizona Office of Tourism, in 2013, Arizona welcomed 39 million overnight visitors who contributed $20 billion to the state’s economy.

“A lot of times people don’t understand the scope of tribes’ financial contributions to the state,” he said.

Jonathan Nez, an NAU alumnus, is starting the program with an invocation in his native language. Ernest Jones, president of the Yavapai-Prescott tribe, will

talk about how his tribe came from being economically challenged to becoming an economic engine within the Prescott region.