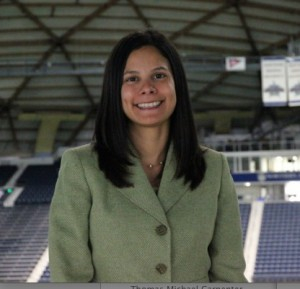 Northern Arizona University Vice President of Intercollegiate Athletics Lisa Campos is on “Flagstaff’s 20 Under 40” list. The award, presented by the Arizona Daily Sun and Greater Flagstaff Chamber of Commerce, honors local business and professional leaders who have achieved success and excelled in their field before the age of 40.

“I am very honored to have been selected for this award and humbled to be among the other recipients who represent the strength of this community,” said Campos.

Campos has been at NAU since the spring of 2012. At the time of her hire at NAU, Campos became one of 26 females and the youngest in the country to lead a Division I program, including 13 head athletic administrators at the Football Championship Subdivision level.

NAU’s success in the classroom and on the competition field has led to a pair of Big Sky Presidents’ Cups for Campos, as well as 26 team conference crowns. NAU student-athletes continue to volunteer in the community, and in 2016, the Lumberjacks tallied 5,428 hours.

Campos serves on United Way of Northern Arizona board and currently sits on the prestigious NCAA Division I Football Oversight Committee. In 2014, she was elected to the National Association of Collegiate Athletics Administrators (NACWAA) Board of Directors.

“I greatly appreciate the NAU athletics staff and coaches who contributed to this award. I am also thankful to The Arizona Daily Sun, Greater Flagstaff Chamber of Commerce and Twin Arrows, who support and sponsor this award.” FBN