Northern Arizona University has been selected to participate in a national initiative designed to help students thrive during their first year.

NAU, alongside 43 other state colleges and universities, joined the American Association of State Colleges and Universities three-year project titled “Re-imagining the First Year of College,” which aims to transform the freshman experience.

According to AASCU, students are more likely to drop out during their first year than at any other point in their college career.

“We are very excited to be part of it,” said Cyndi Banks, dean of University College and NAU team lead on AASCU project. “The idea of the project is to think outside the box, stop piloting and simply implement what we know works for first year students facing the challenges many come up against as part of their transition to college whether it be financial, personal or cultural.”

Melissa Welker, executive director of University College, added, “As an institution, it’s our job to holistically support our students—to ensure they get what they need as whole individuals.”  Welker said that transforming the way students experience their first year absolutely creates a domino affect—not just for NAU, but for society—given how much importance is placed on obtaining college degrees in the professional workforce. 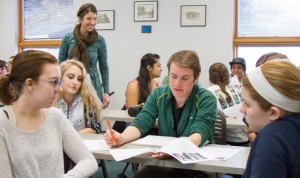 As part of the project, NAU will select and implement proven, innovative strategies and programs, adapting them to the university’s unique environment and needs. The evidence-based strategies focus on four core areas to help first-year students succeed: institutional intentionality, curriculum redesign, changes in faculty and staff roles and changes in student roles.

AASCU kicked off the initiative, funded by grants from the Bill and Melinda Gates Foundation and USA Funds, at the 2016 Academic Affairs Winter meeting in Austin, Texas earlier this month. NAU leaders John Doherty,Laurie Dickson and Taran McZee, and student leader Jonathan Yamasaki, joined Banks for the event.

“The energy and momentum created amongst the 44 institutions selected to participate in the three-year project launched at the winter AASCU meeting was palpable and brought a sense of collaboration and excitement and importantly hope in the midst of the many challenges we face in higher education today,” Banks said. “At NAU, we have lots of work to do to build upon the many great things we already have in place to reinforce and strengthen the achievements of our students through creating a high quality, engaging educational environment for them.”