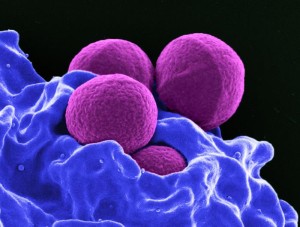 A Northern Arizona University professor and a team of researchers are seeking to better understand staph bacteria, information that could lead to reductions of the potentially lethal pathogen.

The team studied samples from inside the nose, home to thousands of types of bacteria, including Staphylococcus aureus. The microbes are usually harmless, but sometimes conditions promote the increased number of staph bacteria, which can lead to dangerous infections on the skin or inside the body.

Professor Bruce Hungate, director of NAU’s Center for Ecosystem Science and Society, investigated how other types of bacteria influenced staph. The work was collaborative with scientists from Johns Hopkins University, George Washington University, Denmark, and TGen North, and was published recently in Science Advances.

The researchers took samples from the noses of 178 middle-aged individuals made up of 96 identical twins and 86 fraternal twins. Measurements evaluated the type and numbers of bacteria in each person’s nose.

The samples from identical twins differed as much from one another as did the fraternal twins. Managing the environment of microbes has the potential to change the way staph infections, many which are antibiotic resistant, could be managed and treated.

“When we are looking at medical infections from an ecological perspective, it is important to consider the number of organisms, the different kinds that are present and the way they interact,” Hungate said. “By understanding and monitoring the organisms that hurt staph, we can effectively design treatments for this pathogen.”

Hungate said medical experts used to think infections were about one pathogen acting alone but science has evolved to understand it is the ways pathogens interact that cause infections.