By Flagstaff Business News on November 24, 2013 in Local News 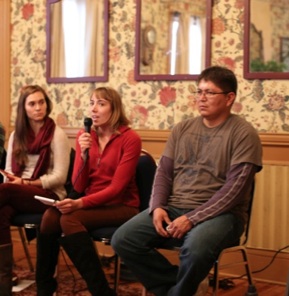 NAU Against Uranium, a volunteer group made of Northern Arizona University students, organized the event “Youth Speak in Defense of the Canyon”. The event was a press conference confronting the exclusion of people born after 1986 from the public review process for the “Canyon” uranium mine, located six miles south of Grand Canyon National Park. Students asked Kaibab National Forest Supervisor Mike Williams to attend and accept a petition about the outdated EIS publicly, but no representatives attended due to “litigation regarding Canyon Mine,” which the students are not involved with.

More than 500 people born after 1986 have signed the petition. Though it’s within the agency’s authority to do so, the Forest Service has refused to update the uranium mine’s 1986 environmental review prior to allowing Energy Fuels to reopen it in April, thereby foreclosing public participation of petition signers and thousands of other young Americans.

“This mine will impact my generation, but my generation is excluded from the Forest Service’s public process,” said Northern Arizona University student Montana Johnson.

The Forest Service claims there is no significant new information to warrant a new EIS, despite designation of the Red Butte Traditional Cultural Property in the area, the discovery of soil and water contamination at the nearby Orphan Mine, and a 2010 U.S. Geological Survey report showing uranium concentrations in groundwater beneath the mine exceeding federal drinking water standards. The mine threatens cultural values of the Havasupai and other tribes and contamination and depletion of aquifers feeding Grand Canyon springs.

“I have no assurance, and neither does the public, that mining can be done safely if it’s based on a 27-year-old environmental review that ignores new science,” commented student Heath Emerson.

“When this EIS was done in 1986, my mother was only 15 years old,” said Sienna Chapman, an NAU student who was born and raised in Flagstaff. “Yet it is my generation and future generations that will have to pay for cleanup and deal with health and environmental effects.”
Last week, citing market conditions and ongoing litigation from the Havasupai Tribe and conservation groups, Energy Fuels placed the Canyon Mine on “standby,” ceasing shaft excavation pending completion of litigation in federal district court. The last time the mine was placed in standby mode, in 1992, it remained so for 21 years.

“We, the undersigned, were born after 1986 and therefore foreclosed from the public process prior to permitting the Canyon Uranium Mine on Kaibab National Forest land – our public land. Recognizing that science has advanced since 1986, including the discovery of soil and water contamination at the Orphan Mine in Grand Canyon National Park, better hydrologic models, and the identification of soil contamination at every uranium mine near Grand Canyon that was studied by the U.S. Geological Survey in 2009, and in light of the tens of millions of taxpayer dollars being spent to clean up uranium pollution on the Navajo Nation, we request a new Environmental Impact Statement, including public input and proper Tribal consultation.  Thank you.”