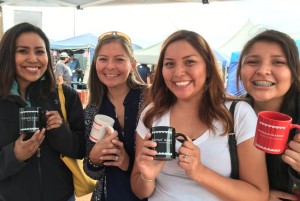 “I bought two clan cups recently and gave one to my son who said ‘Koooool! What a great idea!” wrote Ursula Wilson, a nurse midwife at Chinle Hospital on the company’s website. “I used my cup at work and it definitely attracts attention, curiosity and dialogue about Navajo culture. What a great way to preserve and spread Navajo cultural knowledge. Thank you.”

Since 14 clan coffee mugs were introduced at the 2014 Navajo Nation Fair, the small company expanded its product line this year with 24 clan license plates.

The website (www.Dinegifts.com) also has pages devoted where the public can learn about their clans and even discuss.

The owner, George Joe, said he first got the idea about 10 years ago, among many other ideas, but never did anything with it until September 2014. “I always thought it would be a good way to promote Navajo culture and language,” said Joe, who has more than 20 years of experience in marketing and public relations. “The difficult part is the writing of the stories because you have to try to bring together the varying accounts of a clan’s origin into less then 20 words.” But with a master’s degree in English and second master’s in education, plus years of writing experience, he has been able to produce the text.

Joe and his helper, Roz Begay, say they really enjoy the stories, interesting occurrences and the people they come across while selling their work.

Which products are popular? “Bilaganna clan license plates are very popular,” said Begay. “People are buying them for their in-laws, friends, bosses or a co-worker, or for [themselves].”

And there are certain clans that are particularly popular, they say, such as Ashįįhí (Salt People clan), Kinyaa’ áanii (Towering House clan), Tábą́ą́há (Edge Water clan), and Táchii’nii (Red Running Into The Water clan).

So far, the clans they have the most difficulty in selling are the Hashtł’ishnii (Mud clan), Tódík’ozhí (Salt Water clan), and Honágháahnii (One Who Walks Around clan).

There are certain clans that dominate in pockets of the reservation. For example, Shiprock is Kinclichinee (Red House clan) and Red Streak/Red Bottom Clan, while the Window Rock has a mix.

“Right now, we only offer 14 clans in the coffee mugs but we will be increasing this to 25 after Christmas, then eventually 100 clans,” said Joe. For the license plates, they have 24 of the most popular clans.

“One of the things I would like to see is that every tribal member has a plate on their vehicle,” said Joe. “It’s a real sense of pride when you are out there in the city and you see someone proudly displaying their Navajoness.”

Inevitably, not everyone agrees with the exact spelling and stories. “But that’s expected,” said Begay, “because there are several sources on spelling out there, and there are varying accounts of the origin of clans. We use Rough Rock’s Navajo-English Dictionary. Many others who sell Diné clan t-shirts use the same source.”

And every now and then, someone approaches them with a clan they have never heard of. “Those are always interesting conversations,” said Joe.

But what makes their day and their effort all worth it is when a child approaches them and knows a lot about their clan. “It’s fascinating when a kid visits our booth and then reads the clans aloud and pronounces them correctly,” said Begay. “Some have influenced their parents or grandparents to buy them a mug. When you see this happening, it really is a sign of hope. Sometimes we just give them the coffee mug or reduce the price. This shows that parents or grandparents speak to them in Navajo, and school teachers and possibly bus drivers are also making a positive impact [in] preserving the Diné language – this is rewarding and what we, Diné Gifts, are about – promoting the Diné culture and language.”

You can find the plates online at www.dinegifts.com. FBN