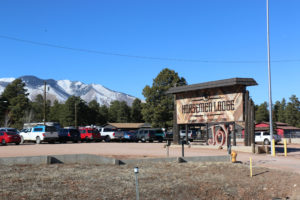 For the Navajo Gaming Enterprise, one of numerous Navajo Nation-owned businesses, 2020 begins with potential. After closing escrow on a 14.1-acre parcel north of Flagstaff, Navajo Gaming is conducting market research to determine best uses for the property, which includes Horsemen Lodge, an iconic steakhouse.

Navajo Gaming is just one of 22 different enterprises owned and operated by the Navajo Nation, each with the goal of creating jobs and stimulating economic development for the tribe, said Brian Parrish, interim CEO of Navajo Gaming. “We are concerned with providing essential services and creating a rising tide effect for the Navajo people.” Parrish added that the recent loss of between 600 and 800 jobs severely affected the tribe.

Late last year, Navajo Generating Station, the largest coal plant in the western United States, closed after 45 years of operations in Page. Run by Salt River Project, the plant used coal from the Kayenta Mine on both Hopi and Navajo lands, creating substantial economic benefits for the tribes. Navajo Gaming Board of Directors Chairman Quincy Natay described the closure as a tremendous hardship, noting the job losses and approximately $40 million in annual revenues being returned to the Navajo Nation.

Like other tribes, the Navajo Nation is looking for economic opportunities, and some of these are related to gaming. Although the $180 million investment in Twin Arrows Hotel and Casino provides economic benefits, many locals avoid the 22-mile drive along Interstate 40 east of Flagstaff. Owning a property just outside the Flagstaff city limits could help the tribe reach multitudes of tourists traveling to Grand Canyon, Page and Sedona.

Longtime Arizona economic development professional Rich Bowen said the land purchase near Flagstaff makes sense for the Navajo Nation and is a plus for the region. “The Native American nations around us, Navajo being the largest, are big economic drivers in Flagstaff,” said Bowen. “The Gaming Enterprise, along with supporting numerous non-profits, is an entrepreneurial group that has helped start other businesses for the tribe, not just gaming.”

Some of those new businesses, he added, will likely retail their products in the new Flagstaff area location, getting their products closer to a large population that they are not reaching now. This new venture will create more reciprocity, with the Navajo Nation benefiting financially and the county seeing additional tax revenues.

The question on the minds of many Arizonans is whether Navajo Gaming Enterprise will offer gaming on the newly acquired parcel. The Indian Gaming Regulatory Act requires multiple steps that would take several years. Parrish said they are conducting research on various applications and mixes of amenities. “We need to weigh our development plans with those of our sister enterprises to make sure they complement one another,” said Parrish, describing the overarching goal of a return on investment for the Navajo Nation. Parrish said his organization is remaining transparent with nearby residents and keeping an open line of communication regarding the parcel’s development.

But some locals are concerned about plans for the property. More than 65 people attended a meeting last month hosted by a group called Citizens for Neighborhood Preservation. While members are not ready to go on the record, a man who lives close to the Navajo Gaming property told Flagstaff Business News the group has had two meetings already, with another planned for January. He said residents are not against gambling or Native Americans making a profit, but are concerned with preserving the rural neighborhood. FBN