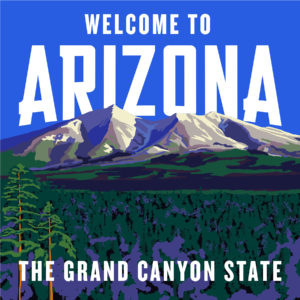 The signature beauty of Flagstaff will now be on display for travelers to enjoy, residents and visitors alike.

Gov. Doug Ducey announced in December the rolling out of new “Welcome to Arizona” signs that will be placed on highways throughout the state. In total, there are six designs, and 29 total signs will be placed by the Arizona Department of Transportation at points in and out of the state.

The new designs, six of them, replace the Arizona flag emblem, which has been used for more than 20 years, said Arizona Office of Tourism Director Debbie Johnson.

“We have such beauty here in Arizona, and it’s something we wanted to share,” she said, adding that Arizona is following suit with Colorado, Wyoming and Utah, all of which did similar work with their “Welcome” signs. “It’s about showing off the state in a different way.”

The designs were selected based on the state’s diverse geography, Johnson said. And the images are recognizable iconic signatures. In addition to the San Francisco Peaks, the images are: Grand Canyon, Horseshoe Bend, Organ Pipe National Monument, Saguaro National Park and Sedona’s red rocks.

“We wanted Northern Arizona to be represented,” Johnson said, adding that most people outside of the state think of desert and cactus when they think about Arizona. “For people to see snow in Arizona is unexpected.”

The news signs are designed to showcase the many different landscapes that Arizona has to offer. “They’re such an important part of identity as a state, and I think that’s really critical,” Johnson said.

Flagstaff Mayor Coral Evans and City of Flagstaff Economic Vitality Director Heidi Hansen have worked alongside Johnson and the Arizona Office of Tourism to encourage more recognition of Northern Arizona in their marketing efforts. “Many times we shared that we should be selling Arizona as a four-season state, not solely a state where we have 288 days of sunshine,” said Hansen.

She added that tourism in Flagstaff generates more than $563 million in economic impact with more than 9,000 jobs, and the sign recognition will help encourage visitors to add Flagstaff and Northern Arizona to their itineraries.

“This exposure to our assets will continue to help drive visitors to Flagstaff,” said Hansen. “It will also encourage a visitor to plan a new trip to our destination and to get locals that only dream about getting out of the heat to come to visit our cool, mountain town. This is a step in the right direction, and the direction is heading them north.”

Johnson said her office will be present to share the new design with the Flagstaff City Council in March. She said she will also present information on funding, which her office has secured, to market Flagstaff in Denver because Flagstaff now has direct flights there.