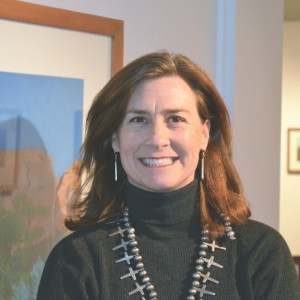 If you visit the Museum of Northern Arizona (MNA), you might run into a charismatic employee bounding her way from museum floor to meeting room, gift shop to collection center. Upbeat and confident, she discusses the scientific value of the museum’s holdings with the same ease and passion as she does the organization’s budgetary challenges. Meet Carrie Heinonen, Ph.D., the museum’s new director.

Heinonen is MNA’s ninth permanent director and assumes the reins from Robert Breunig, Ph.D., who is stepping down as director and CEO, but will retain the position of president until his retirement in June 2015. Breunig had served as director for the past 11 years, making him the third-longest tenured individual in this position, behind museum co-founder, Harold Colton (22 years) and Ned Danson (16 years).

Heinonen brings not only an academic background, but also diverse business experience, which is no doubt helpful for solving the budgetary needs of today’s cash-strapped museums. (MNA’s annual budget is $3.5 million.)

After growing up in Tucson and graduating from Canyon del Oro High School, Heinonen began a career path that crisscrossed the country. She graduated from Dartmouth College in 1991, majoring in art history and earning a senior fellowship at Dartmouth’s Hood Museum of Art. During college, she spent a summer on the White Mountain Apache Reservation, assisting with summer camps. She later interned at the National Gallery of Art in Washington, D.C. and studied indigenous art in New Zealand as a Rotary International Graduate Fellow.

A curatorial assistant position at the Heard Museum brought Heinonen back to Arizona. “I went off and got the logical thing for anyone working in museums – a business degree,” she said of graduating from the Yale School of Management in 1997 with a Master’s Degree in Public and Private Management.

“There was a little method to my madness. A mentor of mine, Timothy Rub, was the deputy director at the Hood and he had gotten a degree in management at the Yale School of Management, which had a focus in non-profit management that boasted of educating business leaders across the sectors. So I had in the back of my mind that it would be very valuable to have a management degree if I was interested in running a museum, which was my ultimate goal.”

In 2005, Heinonen veered back into the museum world. “Jim Cuno, Hood Museum director when I was an undergrad, was now the director of the Art Institute of Chicago and wanted to start a marketing department. It seemed a perfect combination of my skill set so I went on and did the branding and built a marketing department. In 2009, I helped launch, from a communications perspective, the Modern Wing of the Art Institute.”

After nearly six years as the vice president for marketing and public affairs at the Art Institute of Chicago, Heinonen stayed in the city for two more years as a cultural and corporate strategy consultant. In 2013, she moved back to Arizona to serve as president and director of the Musical Instrument Museum. She stayed until May 2014, when Breunig’s pending retirement and MNA’s consequent need for a successor captured her attention.

“In addition to museums in general, I also have a big interest in Native communities. So when Robert and I got to talking about the position, I think it was clear to both of us that MNA would be a wonderful fit for my areas of experience and interest.”

She says further understanding of the museum’s operations reinforced this feeling. She realized, for instance, that the museum’s Easton Collection Center is a world-class facility. “One of the many things about Easton that impressed me was the fact that it is platinum LEED certified [a rating system for constructing and operating green buildings] because I know what it took for us to get a silver LEED certification for the Modern Wing. I cannot imagine the care, expertise, thought and planning that went in to getting that platinum certification. It’s hard enough to do on a regular building, but to do it on a building with such a high standard for temperature and humidity control – it’s really quite a feat. Since Robert introduced me to that building earlier this year, I began salivating to get closer to MNA.”

In discussing the significance of MNA’s work, Heinonen pointed out, “I think people coming to this area have a huge fascination with this land and the cultures that were established here, and those are areas in which the museum thrives. That’s a tremendous service we provide, showcasing those evolving cultures and generally highlighting everything about the Colorado Plateau from a scientific perspective. We’ve got the ‘ologies’ covered, from ecology and biology to geology, paleontology and archaeology. We’re contributing to the knowledge of the Colorado Plateau and when we can, we’re also facilitating discussion about what’s happening on the plateau and its future.”

For example, the museum hosts the Future of the Colorado Plateau Forum, with topics including drought, clean energy and the history of fires. The next one is scheduled for Thursday, Jan. 22 at 6 p.m., to focus on mega-fires, in support of the Slide Fire exhibition opening Jan. 17.

“I think there’s a great sense of pride about this institution in the community and there’s also a strong sense of ownership, which isn’t necessarily true of all museums. I suppose it’s a little difficult to quantify, or even qualify, what that means, but the strong sense of caring for, protecting, and owning this museum as a community resource is a very tangible concept. That just underscores the need for the museum to continue to engage with the community, to get cues from community members as to what they want from this museum and how we can better serve them, and I take that responsibility very seriously.”

Heinonen welcomes her circle of support in her new role. Breunig will continue work at the museum, leading the effort to renovate the ethnology gallery, a project supported by recent grants totaling more than $600,000. And there are other Heinonens in Flagstaff. Scott, her brother, is the chef/owner of several local restaurants, including the recently opened Tourist Home on South San Francisco Street. Kevin, her cousin, is a partner in these business ventures, and Scott’s wife, also named Carrie Heinonen, is the director of marketing and community relations at the Summit Center. FBN