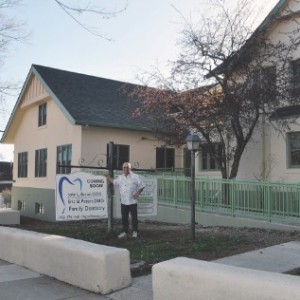 Six decades ago, the sounds of school-aged children playing emanated from the home and the backyard of the Bledsoe home at 323 N. Leroux St., at Dale Avenue north of downtown Flagstaff.

James (Jim) Babbitt of the pioneer family, spent his childhood living two houses north of the Bledsoe home and was best friends with Bob, one of the three children of R.A. Bledsoe, owner of Bledsoe’s Men’s Shop, who owned the home for about 30 years. The other children, Doug and Carol, were also friends of the Babbitt children.

Babbitt is the youngest son of six children in the family of Paul J. Babbitt and Frances Perry, in the lineage of C.J. Babbitt, one of a clan of five brothers from Cincinnati, Ohio who came to Flagstaff in the late 1800s to acquire ranch land for grazing cattle and sheep and to establish trading post operations.

“When we were little, it was the grandest house in all of Flagstaff, with a grand yard all around,” Babbitt recalled. “It had a formal dining room and wonderful oak woodwork on the second floor; it was just beautiful. All the kids’ bedrooms were upstairs. In the basement, there was a utility room and a bedroom for a maid, and there was a big room that was a rumpus room with pool table.”

The home also included an attic and a locked room in the basement containing slot machines that the kids could look at but not use.

The backyard and barbeque area were also important to the children.

“My next older brother, Charles, and my younger sister, Christine, a lot of times we had sleepovers out in the back yard,” Babbitt said.

Built around 1918, the home served first as the residence of prominent stockman Al Sanford, who was the manager of the T.E. Pollock Cattle Company.

The next occupants of the house were the five members of the Koch family, led by I.B. Koch, who managed the Arizona Lumber and Timber Company for the Riordan family.

Today, the beauty of this 100-year-old home is being preserved after an extensive restoration and expansion before it opened this month as the new dental office for Dr. John Bacon, who has practiced dentistry for 25 years out of his former office at 902 N. Beaver St.

“It’s been a frat house, it’s been a law office, and now it will be dental offices,” Bacon said. “My office that I’m currently in, my patients have always told me it feels like a home; it’s less threatening. This new space is just perfect, a lot like the office I had, but bigger.”

An expansion has added 4,000 more square feet to the original 6,000-square-foot structure. All 10 operatories or dental workspaces are located in the addition, which matches the oak floors, white walls and oak moldings of the original home.

Adding an addition was challenging because the home is on the National Register of Historic Places, Bacon said. “We managed to incorporate state-of-the art equipment in our addition while keeping the atmosphere of the office friendly and personal. This was accomplished largely by matching the design of the original house interior with the addition.”

Karl Eberhard, community design and redevelopment manager for the City of Flagstaff, said the property qualifies for the register as a “contributing” structure because of its significance in the north end of an historic district.

Building the home was part of the expansion of the residential district during Flagstaff’s second major building boom north past the original railroad subdivision that established the core downtown section of town.

“We worked with him on how to make his addition in a way that is compatible with the original structure,” Eberhard said about the city’s collaboration with Bacon. “He did pretty well. He said, ‘I’m just going to assume that it has contributing significance. I’ll just follow the guidelines for historic preservation.’ What you are trying to do is make an addition that is compatible but not mimicking the old structure.”

Eberhard said the home is a mixture of Neo-Colonial and Craftsman architectural styles.

Sanborn maps from that era, which were used for insurance purposes, show the neighborhood was sparsely settled when the home was built.

“There wasn’t a lot of paving in town at that point,” Eberhard added. “There were only three cars in Flagstaff then. The Babbitts had one and the Yeagers [pioneer sheepherding family] had one or two. In that time, getting up to Flagstaff in a car was a challenge.”

Babbitt remembers how much fun they had on the rustic streets. “In our youth, the Dale Avenue between our two houses was not paved, just a dirt road,” he said. “The city would close Leroux for about three blocks from Elm to Birch for sledding and tobogganing in the winter. It was plenty good enough for us to go down. To think the city would close off the street for kids was kind of sweet.”

A reminder of days past is the century-old apple tree near the back of the yard. Despite additional paving for 22 parking space, the tree still stands, apples withered but perhaps waiting for new spring growth.

“That’s one thing I changed from the plan – to try to save that apple tree,” Bacon said.

Acquiring more parking space and expanded work area were two of the reasons Bacon decided to change his location, especially after Dr. Eric Peters became his associate in December.

“We just grew to the point where we needed a different office space,” said Bacon, who said he moved from Minnesota to Flagstaff because he and his wife “liked the sunny Southwest.”

The couple, whose daughter, Claire, was raised here, considers Flagstaff a great town to live in. “In the Valley, everywhere you go, the dentists are in strip malls and their offices often lack character,” Bacon said. “Here, I see all the people I know everywhere I go… I think when you know you’re going to see someone again, people take care of each other better.”

Bacon hopes another dental-related business may move into the improved 2,200-square-foot, half-basement area. The other half of the basement is a large two-bedroom apartment that will soon be filled with a renter.

Other tenants on the second floor, including two architects, an accountant, masseuse and an engineering company, are already renting offices.

Also, the historic carriage house out back had been used as storage but is now being converted into a studio apartment. For reposing after work, a rooftop deck with wood railings on both sides connects the old home to the new addition.

“I want to be able to yell at my friends when they go by below,” Bacon said with a laugh. “I’m excited about being downtown; it’s going to be fun.” FBN