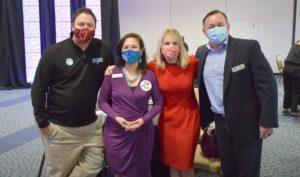 Despite the difficulties of promoting Flagstaff during the pandemic to potential visitors and businesses looking to relocate, Discover Flagstaff officials and economic vitality leaders had many successes to report during their Annual Marketing Meeting on Thursday, Oct. 21.

City of Flagstaff Economic Vitality Director Heidi Hansen stressed the fact that during the pandemic the Flagstaff Airport never shut down. “This was no easy task. There were several other smaller airports that lost service. We did not. This is because we continued to market the airport that we were open for business. Even though we experienced enplanement decreases, we still served over 86,000 patrons. We kept our Phoenix, Denver and Dallas flights. Sometimes the daily amount fluctuated, but we filled seats and we didn’t lose service.”

She reported that attracting airline service and keeping it are no small accomplishments and said, “I see a San Francisco route on the horizon.”

She also provided an update about several new pieces of snow equipment that will be able to clear the runway faster than ever and additional airport parking with a gated paid-parking program and moderate pricing. “If you’ve been to the airport recently, you can see we have a second parking lot that is going in and will be completed very soon. There will still be free time – up to an hour – where you can enter and exit, but you have options for parking.”

Hansen also noted four business incentive programs that took effect in the past year along with the addition of the Tesla part manufacturer, Whitehall Industries, to the Flagstaff family, which is bringing 150 new manufacturing jobs to the community.

Discover Flagstaff Director Trace Ward praised the local tourism team for keeping the Flagstaff brand “alive, relative and engaging.” As a result, the Discover Flagstaff website received 2.1 million page views in the last 12 months and was the runner up for the Best Tourism Website award at the national ESTO Conference, U.S. Travel Association’s Educational Seminar for Tourism Organizations.

In addition, Discover Flagstaff promoted fire awareness in collaboration with the Forest Service, Flagstaff Fire Department and the Arizona Office of Tourism. “We also promoted ‘Hug a Tree’ for folks and kids who get lost in the forest, flood safety, community action, COVID awareness and support for our local businesses and many other efforts such as ‘Acts of Kindness,’ which just tries to put a smile on your face,” he said.

Ward discussed the “Pledge for the Wild” program, which informs residents and visitors about how to give back to the trail they just hiked and emphasized the importance of promoting the community’s values, which he identified as: Community, Diversity, Inclusion, Dark Skies, Open Spaces, Local Economy, History and Sustainability.

“You have to embrace the community that welcomes your visitors,” he said. “We understand that the community has values, and we educate, inspire and motivate the traveling public to not only understand what our values are but to participate within those values.”

Ward also called Flagstaff one of the “Goldilocks Destinations” in the country. “We have authentic Americana, outdoor recreation, and we are a great hub and spoke to the Seven Wonders of Northern Arizona, not to mention we have magnificent attractions right here in our city,” he said, adding that Flagstaff has great food, craft beer and “some amazing whiskey.”

Maker of John Shaw whiskey, Canyon Diablo Distillery of Flagstaff, along with Discover Flagstaff recently won the Arizona Office of Tourism Governor’s Award for Spirit of Service Crisis Response. The local distillery shifted its operations to make sanitizer for the Tuba City Hospital when the medical facility became desperately low as the COVID-19 took hold in March 2020.

Canyon Diablo Distillery owner Joe Pendergast spoke about the pivot. “We took what little alcohol we had left in our facility at the time when it was just incredibly difficult to get alcohol and we made sanitizer. It brought just great joy to me to be able to load up 36 gallons of sanitizer and drive it up to Tuba City hospital in the first week of April. They were down to just several jugs left in the entire hospital. It was very heart-fulfilling for me to do so.”

The distillery also offered it elsewhere to the Hopi and Navajo nations, as well as to local restaurants that needed it as well. Canyon Diablo continued to supply the Tuba City hospital with sanitizer for the remainder of the year.

She said the economic impact of the tourism sector reaches far beyond the more than 9,000 jobs that directly serve visitors. “The multiplier effect of tourism dollars in our community extends to the tune of $750 million. Simply put, the city would not have the funds to provide the level of services for clean and safe parks, recreational facilities, open spaces, educational programs, cultural experiences, beautification, public arts and sciences that we and our families and our neighbors enjoy if it were not for the tourism sector and the Bed Board and Beverage BBB tax revenues it brings to our beloved mountain town.” FBN