You are here: Home / Business / Niles Radio Growing With Flagstaff 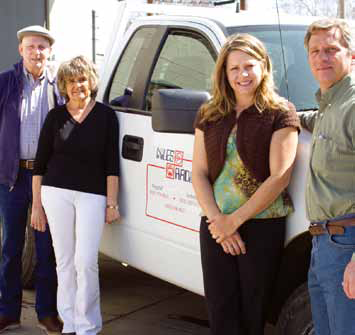 On the corner of East and Johnson in Sunnyside, the Niles Radio building has been a familiar sight to Flagstaff residents since 1954. Only a few might be able to tell you what this small, full-service, family-owned telecommunications provider with just 16 employees does, or how it has managed to more than survive, but to grow exponentially over the years. Other businesses might take a few lessons from Niles Radio about succeeding in a tough competitive environment. Niles Radio’s secret appears to be held in honoring old-fashioned values like loyalty and trustworthiness, and staying in front of technology.

Founded 56 years ago by Clayton Niles as a Radio Common Carrier, the nowextinct operator-assisted mobile phone system, the company was bought by Jim Cullen in 1971 and it has grown with the evolution of communications technology ever since. Cullen still owns Niles Radio with his wife, the finance officer, but Jim considers himself a semi-retired consultant. His son, Kelly Cullen, an NAU mechanical engineering graduate, heads up the day-to-day operations, and daughter, Kathleen Callander, an NAU accounting graduate, handles the accounting.

“In those days, our population was much smaller, but Niles has had this steady growth rate over the last 40 years,” Jim Cullen said. “Back then, everybody in town knew everybody else, so you could get all the help you wanted without having to worry about anything. Everybody in those days wanted you to succeed. We’ve always been at the corner of East and Johnson, but we’ve added onto the building a couple of times. Since 1971, two-way radio has evolved dramatically.”
Niles Radio’s customers include public safety, military, private businesses and individuals. Cullen noted that Niles Radio bids successfully on contracts both in and out of Arizona. “We bid on many projects for local and federal agencies,” he said. “We bid on contracts from Alaska to the Mississippi River, and we’re pretty successful on our bids and results.”

Niles Radio has grown forty-fold since 1971 and does anywhere from $3 million to $5 million in sales annually, estimates Kelly Cullen. Its divisions include commercial and public safety two-way radio systems, cellular phone business, microwave networks, control systems and mountaintop sites. Niles Radio has built and owns ten mountaintop sites for its own use, serving cellular, public safety, and commercial users, all interconnected with microwave and fiber optic systems providing telephone, radio and Internet service across most of Northern Arizona.

Kelly Cullen credits much of Niles Radio’s competitive strength today to adapting to customer needs and technical savvy. “The technology is advancing so quickly now that we spend a lot of time staying ahead of the changes. We transitioned from analog to digital for all of our systems,” Cullen said. “We have the guys in here that can design and engineer anything; we handle all the phases of our projects in house, we rarely need to go outside our own doors. We essentially handle projects from design and engineering to licensing and permitting, dig the holes, pour concrete, erect the towers and buildings, and finish at the antennas! Our competitors generally don’t have the sites, the microwave systems, the infrastructure, or the engineering abilities we have right in house. That’s what makes our business really unique—we could be up in our front sales office working a $20 cellular phone, and in the back we could be working a multi-million dollar microwave project.”

Pivotal to meeting evolving customer needs has been the technical skills of employees who have remained with the company for decades, Cullen said. “We have a tight-knit team of long-term employees at the core of the company.”

Niles Radio’s primary business since 1954 has always been two-way radio, providing radio communications equipment and services to commercial customers such as construction and service companies and public safety agencies.
“Two-way radio is the easiest means of communicating the plan to your employees,” Cullen said. “When you talk to one guy, all of them hear – wherever they are – what the plan is; everyone gets the same big picture. And of course, no service contracts and no monthly charges mean cost efficiency; you can’t do that with a cellular phone.

“Today’s two-way radio systems are more than regional; they are multi-state,” Cullen added. “We have customers that can cover several states because of the systems that we have. You could have an employee in San Diego, and he can talk directly back here to Flagstaff, without using a cell phone, just the radio in his truck. We have an all-digital two-way radio system here in Flagstaff that allows you to text between radios and even locate your employees with built-in GPS. It’s all built into these digital radios now, and they can’t even be monitored with a scanner; communication is private and secure. The advances with NADINE, our everexpanding Northern Arizona Data/Internet Network Extension project, will mean we have 300Mbps data available at most of our sites, providing Internet and advanced communications to all of our commercial, private and public safety users. The capabilities just keep expanding.”

Asked about the future, Cullen said, “My father’s run this place almost 40 years, and it’s to his success early on that this place still has the doors open. We just seem to keep clicking along. The future looks bright.” FBN