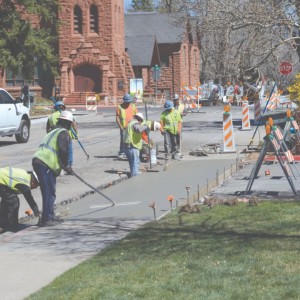 Flagstaff streets are getting a long overdue facelift thanks to an effort spearheaded by city officials and overwhelmingly approved in a tax referendum by Flagstaff voters last fall. Through the next 20 years, $100 million will go toward evaluating each of the city’s more than 1,000 streets – totaling in excess of 660 lane miles – and repairing them as needed. The initiative, called the Road Repair and Street Safety Improvement Program, is good news for business owners, residents and tourists who depend on reliable and safe travel throughout the city.

Historically, funding for Flagstaff’s road maintenance has come from the state’s gas tax that comprises the Highway User Revenue Funds (HURF), designated for use by cities and counties around the state to help fund street repairs. But, according to former Flagstaff City Manager Kevin Burke, in a November 2014 public presentation, this tax has not been adjusted since 1991, despite inflation, an increase in road use leading to an acceleration of road deterioration, more efficient vehicles that don’t use as much fuel and thus generate less tax revenue, a 34 percent increase in the number of roads in Flagstaff, and increases in the cost of repairs. Plus, in recent years, the state has swept significant portions of HURF money into the state’s coffers to cover budget deficits.

The result has been substantial underfunding of Flagstaff’s street maintenance efforts. “The streets department estimates we should be spending $5 million per year to properly maintain Flagstaff’s roads, but we were actually spending only $800,000 to $1.2 million,” said Councilmember Jeff Oravits. “That’s such a huge deficit that ultimately it led to roads really falling apart over the span of a decade.”

Oravits took office in 2012 and jumpstarted an effort to reverse the funding shortfall. “Jeff was, from his first day in office… harping about the streets and pavement and never let up,” said Flagstaff Mayor Jerry Nabours at an April 1 project kick-off ceremony. Oravits’s prodding eventually led to comprehensive studies and public education efforts, led by Burke and his team at the city.

In relatively short order, city staff called for a tax referendum that the City Council unanimously passed. It stipulated a 0.33 percent increase, or 33 cent per $100, in the city’s sales tax. Officials estimated this would result in $5 million per year and $100 million during the proposed 20-year span of the tax.

Oravits explained that a large percentage of the work will happen toward the beginning of the project. “There’s a lot of catch up that’s going to happen in the first five years and we’ll be spending around $10 million per year.”

While some roads will just need cosmetic enhancement via resealing or resurfacing, others that are beyond simple repair will have to be ripped up. “Tear-ups cost many times more than basic maintenance. Lockett is a perfect example. If Lockett had been resealed and resurfaced consistently, then it wouldn’t be a tear-up. That didn’t happen and it is in such poor condition that it will now have to be completely pulled up, and at an exponentially higher price than if we had kept up with it,” said Oravits.

Oravits compared road degradation to paint on a house. “If you let all that paint peel off and the wood starts rotting, then you have to rip out that wood. You have the same thing with streets—they degrade so much that eventually you have to tear up the whole road.”

He says the strategy now is to keep resurfacing and resealing.

The work will not only address the streets themselves, but also adjacent crosswalks, curbs and sidewalks. Safety is of paramount concern, but city officials also understand the need to make modifications in order to comply with current Americans with Disabilities Act (ADA) standards for accessibility.

“Flagstaff’s street maintenance department will work with the utility department to coordinate efforts, so that if, say, there’s an ancient water or sewer line underneath the street, the work will all happen at once,” said Oravits. “The last thing you want to do is pave it and then the next year rip it up to work on the underlying utilities.”

The project will not only result in road improvements, but also a certain financial influx into the community. The work will be divided into different projects, each requiring its own contractor bids. The successful bidders on much of the work to be conducted in 2015 are local companies.

While Oravits expects the community to be happy with the improvements, he realizes that such work comes with a certain level of frustration for drivers. “In 2012, we spent $1.2 million on road maintenance and this year, it’s going to be $10 million. That’s a huge increase in the amount of construction. And we have a short window, from April to about September, to do this. Then you have the tourists in town, all of which means some potential longer waits in traffic. But it has to be done and we ask that residents and visitors be patient while work is going on.”

The city will regularly post a schedule of upcoming work at the Road Repair and Street Safety Improvement website www.flagstaff.az.gov/roadsafety. FBN