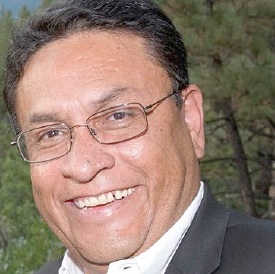 Longtime Flagstaff resident Steve Peru has spent most of his career helping people. He will now use that experience – and the relationships he has built – in his new role as president and CEO of United Way of Northern Arizona (UWNA). Peru took on the position Feb. 16 and succeeded Carol Dykes, who has served in an interim role since Jill Briggs resigned last October.

While previous efforts to fill this position involved a nationwide search, this one had more of a local focus. Past UWNA Board Chairman David Abeyta said, “The past few months have allowed us to assess the organization’s needs, and what we came to realize is that UWNA needs a hometown leader who understands the unique characteristics of Northern Arizona and has a strong network of partnerships in place to help propel the organization forward.”

Board members felt that Peru, a longtime volunteer with United Way, met those requirements. He came to Flagstaff more than three decades ago to attend Northern Arizona University and has since made a name for himself through his work in various service positions. For seven years he honed his talent for building relationships while with the Coconino County Community Services Department, a skill he sees as critical to the success of United Way. Peru said, “United Way is very relationship oriented. It’s based on relationships with donors, community organizations and local government.”

Peru later transferred to the county’s job training department, providing training and support to unemployed individuals. He then went back to NAU and earned a master’s degree in public administration before working in county management, first as an assistant but ultimately rising to the position of county manager. He held this positon until 2011, when he retired and then took a position at W. L. Gore & Associates.

Throughout his career in Flagstaff, one constant for Peru has been his community involvement and in particular, commitment to helping United Way meet its goals. “I’ve been a United Way volunteer since the early 80s, have been on the board at least twice, and have served on about every committee they have. I really felt a calling there. At the same time, Gore is a huge supporter of United Way and I worked on the Gore United Way campaign. So being able to do all those things kind of led me down the path to where I am today.”

Peru takes over an organization that covers an area ranging across Coconino, Apache and Navajo counties. It recently completed a successful $1.5 million annual campaign, up more than $160,000 from the previous year. Dykes says she believes Peru will build on this success. “I’m certain Steve will continue to advance the common good that we are all dedicated to achieving for our community, and I’m honored and excited to continue our work together,” she said.

Peru grew up in Morenci with his parents, an older brother and younger sister. His father, like generations before him, worked in a copper mine. His parents always had the goal of sending their three children to college. Peru initially attended Eastern Arizona College in Safford for two years. “I looked into some classes in business administration and kind of a business track but really found more of a calling to work in the helping profession. So I came to school at NAU with that in mind and hooked up with the sociology department.”

Several decades later, Peru is still helping people and looking ahead to improving the lives of community members. He says he realizes the obstacles involved and is working hard to meet them. “I think our challenges moving forward are the same ones that every non-profit sees. How is philanthropy changing, and what are we doing in the non-profit community to respond to those changes? What do we need to be doing to make sure that if someone wants to give time money, or advice, we are able to respond to that donor to make it happen?”

As to where he sees UWNA down the road? “That’s what keeps me up at nights,” he said. “What is the organization going to look like in five years and how do we articulate that to someone today so that they can help us see that vision?” FBN