You are here: Home / Local News / Photo of Slot Canyon Most Expensive in History 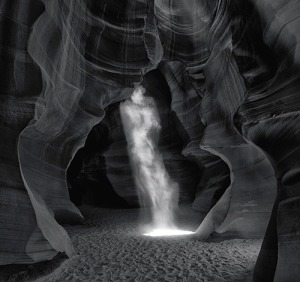 LIK USA announced the sale of the most expensive photograph in history by world-renowned fine art photographer, Peter Lik.  “Phantom” sold to a private collector for an unprecedented $6.5 million.  The purchase also included Lik’s masterworks “Illusion” for $2.4 million and “Eternal Moods” for $1.1 million.  With this $10 million sale, Lik now holds four of the top 20 spots for most expensive photographs ever sold.  He already has a position in the ranking with a previous $1 million sale of famed image, “One.”

“The purpose of all my photos is to capture the power of nature and convey it in a way that inspires someone to feel passionate and connected to the image,” said award-winning fine art photographer Peter Lik.

“Phantom” and “Eternal Moods” are black and white representations of Lik’s iconic images “Ghost” and “Eternal Beauty.”  Lik is known for his artistic approach to landscape photography and capturing Mother Nature’s vibrant colors.  His use of black and white imagery is a rare and compelling departure from his normal style.

“Certain textures and contours found in nature lend themselves beautifully to black and white photography,” said Lik.  “The intensity of contrasting light and dark spaces was surprising, but made for some of the most powerful images I’ve ever created.”

“It is noteworthy that the sales of these photographic works denote another milestone in the development of fine art photography, as well as a new benchmark for the value of Peter Lik works,” said Tratos.

These sales may be confirmed through the buyer’s counsel, Joshua Roth.

“Our client is a long-time collector of Lik’s works and is delighted to add these one-of-a-kind photographs to his impressive collection,” said Roth.

About Peter Lik
Peter Lik began capturing the wonders of nature as a young boy in his native Australia and never stopped.  In 1984, Lik migrated to the U.S. and discovered his passion for panoramic photography.  One of Lik’s most notable projects, “Spirit of America,” is a 50-state landscape exploration of perilous deserts, ethereal mountain peaks, lush fields and glimmering cityscapes.  Peter Lik’s love for America and its landscapes led him to become a naturalized citizen in 2013.  Over the years, Lik’s career has been marked with award wins as a Master Photographer from both the Australian Institute of Professional Photography (AIPP) and the Professional Photographers of America (PPA).  He has also been awarded fellowships from the British Institute of Professional Photographers (BIPP) and The Royal Photographic Society (RPS).  In 2011, Peter jumped into mainstream culture by starring in the NBC-produced TV series, “From the Edge with Peter Lik.”  With 14 galleries around the United States, Peter Lik counts presidents and celebrities among his collectors.  Lik’s masterworks “Ghost” and “Inner Peace” have been included in an exhibition of Nature’s Best Photography at the Smithsonian National Museum of Natural History in Washington D.C.