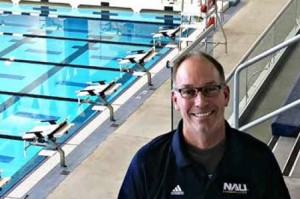 “Runners and cyclists have been coming to Flagstaff to train at high altitude since the Mexico City Olympics in 1968. Since 1982, there’s been a ton of swimmers here. Now that we have the new pool, we can accommodate even more of them,” said Andy Johns, head coach of the Northern Arizona University Swimming and Diving program.

With the grand opening of the Aquatic and Tennis Complex last month, the public was finally able to sneak a peek inside the new 120,000-square-foot facility. The project kicked off in April 2014 with a ground breaking for the state-of-the-art complex that contains a larger Olympic pool and new separate diving platform configured with diving towers and a diving well.

“On the 50-meter Olympic course, we now have 10 lanes versus eight lanes. That’s two more lanes for long-course swimmers,” explained Johns. With a moveable bulkhead, the new pool can accommodate 19 25-yard lanes, as compared to only four in the former Wall Aquatic Center. “The short course is an American thing – we are the only place that swims in yards,” said the coach with a smile.

The Aquatic and Tennis Complex replaces the Wall Aquatic Center, which had long been considered a world-class training center. NAU’s swimming and diving complex coupled with Flagstaff’s 7,000-foot elevation make the facility a top high-altitude training center for Olympic athletes.

“The main draw is the elevation. What I think sets Flagstaff apart for international competitors [choosing where to train] is the access to downtown, to Phoenix and Las Vegas. Many of these teams come for three to four weeks, and they like to be able to drive to Las Vegas for the weekends. For the most part, the other top high altitude training facilities are pretty remote or have other concerns like water quality,” he said.

“The main reason they come here is because there is a town here with amenities and they are well taken care of,” said the head coach. “We have five countries represented right now: Italy, Japan, Hungary, Brazil and a Vietnamese swimmer. There are more teams slated to come from now until July, including those from Australia and New Zealand. They stay for three to four weeks,” said Johns, who has served at NAU as head coach for 20 years.

“This has huge economic impact because in general terms when anyone travels, 50 percent of the budget goes to lodging and 25 percent to food. These teams are spending a lot of money in Flagstaff. When school is in session, like now, there is no room to house them. They’re staying in local hotels.”

Johns says the athletes are treated like rock stars in their own countries. “Here, they can be anonymous without the distractions of home.”

“Everyone wants to train here; no one wants to compete here. They want to compete at sea level,” said the coach, who explained that the pool is more a training pool than a competitive pool.

For those who missed the open house, the Aquatic and Tennis Complex will be open to the public as NAU hosts the 2016 NCAA Zone E Diving Championships March 7-9. Some of the best divers in the country will be coming as they look to qualify for NCAA Championships one week later at Georgia Tech.

The Aquatic and Tennis Complex is open not only to the NAU swim team but also to the public, students, faculty and staff. A wide variety of membership types and rates are offered, including alumni, community and high school rates.