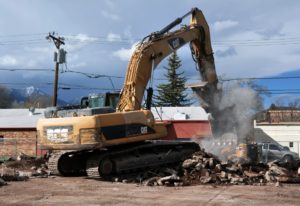 Across from Wheeler Park in the heart of historic downtown Flagstaff, a team with heavy earth-moving equipment made short work this spring of demolishing three non-historic buildings.

By mid-April, a huge gap in the urban landscape had developed, consisting of multiple parcels, including a half block north and a quarter of a block south of Aspen Avenue.

The City of Flagstaff’s Heritage Preservation Commission approved a Certificate of Appropriateness for the construction at its meeting on Dec. 16, 2015.

This property already has the zoning for a hotel, so no rezoning or public meetings were required, Averitt noted.

However, there were some special circumstances with the project.

In addition, the acquisition of public right-of-way along the east side of North Humphreys Street was required to preserve the necessary setbacks for the possible widening of the street, she said.

Steven Shumway is affiliated with Whiting Brothers and is guiding the project through to completion. He detailed the configuration of the inn. “It will have a large pass-through lobby connecting the hotel entrance on Humphreys to the port-a-cochere entrance on the other side of the hotel, an outside patio area with a fireplace and seating along Aspen Avenue, a large seating area adjacent to the lobby where guests can mingle or enjoy a meal, an indoor pool and spa, and a gym.”

This is the only current extended-stay Marriott in Flagstaff. “Each room will be equipped with a kitchenette (fridge, stove, oven, microwave and cupboard space) to appeal to travelers who want to be in Flagstaff for an extended time,” he added.

There are two other Marriott-branded hotels in Flagstaff, Courtyard and SpringHill Suites, but Shumway said he and Whiting Brothers have no business relationship with the other Marriott properties.

Whiting Brothers Investment originally started in the sawmill business in Northern Arizona, possibly as early as the late 1800s, he said. “As time passed, WBI evolved from producing lumber, to cattle ranching, to car dealerships, to grocery stores, to eventually developing service stations and hotels, including along Route 66,” Shumway explained.

According the Flagstaff Convention and Visitors Bureau, tourism industry measurement totals for hotel occupancy have been increasing each year, with 2015 statistics showing a 74.4 percent occupancy rate, an increase of 6.3 percent from the previous year.

Such figures may indicate that increased occupancy rates are enhancing Flagstaff’s status as a premier destination.

During holidays, hotels and motels often are at full occupancy, sometimes making it a challenge to find accommodations and possibly indicating the need for additional facilities.

The location downtown is a prime site for attracting a variety of guests, he noted.

“Our location is also great for business travelers, as it is within walking distance to NAU, great restaurants, many governmental entities, and close to the Flagstaff Medical Center and other great amenities,” Shumway said. “We also want to appeal to guests who are seeking to stay in Flagstaff for more than one night. A traveler who wants to visit the Grand Canyon, ski at Arizona Snowbowl, tour the area or simply experience all that Flagstaff has to offer is the ideal guest.”

Vehicular congestion downtown, a major concern for locals and visitors alike, should be mitigated by the allotted parking spaces.

“Guest parking will be located on the parcel where the hotel is located and on the parcel just south of Aspen and on the opposite side of Humphreys from City Hall,” he observed. “We hope that there will be opportunities to increase the number of available parking spots to downtown businesses during the daytime as guest parking for the hotel is typically used at night.”