By Theresa Bierer on October 8, 2010 in Business, Local News 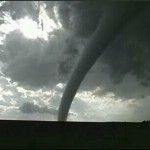 The Bellemont business severely affected by tornadoes is working on repairs and supporting families whose homes were also damaged.

On Wednesday, several tornadoes touched down in Bellemont just west of Flagstaff, overturning railway cars and semi-trucks, and tearing off portions of buildings including multiple residences.

Camping World, a newly established business is Bellemont, sustained some of the heaviest damages.  West Region Vice President Kevin Wise tells Flagstaff Business News, they are still in the process of assessing the losses. 35 RV and trailer units have been totaled, he estimates, at a cost of about $600,000.  Camping World is doing cleanup operations and plans to be operating normally soon.

“We are sorry for the losses that people are experiencing. We are here for our employees and the community, ” said Wise.

10-15 homes in Bellemont are uninhabitable because of sustained injury from the tornadoes.  Dozens of others have varying degrees of damage.

Meanwhile, The United Way of Northern Arizona has established a Bellemont Tornado Fund to assist individuals impacted by this week's tornadoes.  Donations can be made through www.nazunitedway.org or by calling 928) 773-9813.