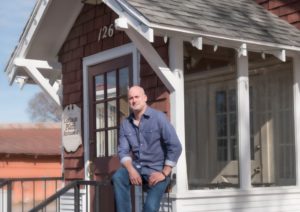 In the mood for tartine of house-smoked salmon, seafood Boullavaise a la Marseille or slow cooked duck confit cassoulet? If so, it is a good thing that Chef Scott Heinonen is about to open The Cottage, which is being designed to feel and taste like a country French farmhouse where French comfort food will be served.

“This nostalgic French Bistro concept derives from the idiom, ‘Everything Old is New Again,’” he said.

And, he adds, it comes just in time when other chefs are concentrating on molecular styles with foams, gels and manipulated ingredients made with “fancy James Bond gadgetry.”

It will open on the site where The Cottage Place was run by Frank and Nancy Branham for more than 22 years. They wanted to retire and were looking for someone who would carry on with the quality and high standards established by the Branhams. Heinonen and Branhams found each other and made a deal.

“We are both excited to see what Scott is going to do,” Branham said. “We are looking forward to dining out without having to work.”

Heinonen is eager to get going. “I can’t wait to get back into the kitchen and guide the legacy of this Flagstaff culinary institution into its next incarnation,” said Heinonen. “The Cottage Place is an iconic restaurant and has been Flagstaff’s premier fine dining spot for decades. I embrace the challenge of maintaining its stellar reputation in the community.”

After a few months of renovation, the restaurant will reopen as just The Cottage with a new menu in mid-April.

“French food is coming back in this country. I think people will gravitate to this food because it is just country cooking,” he said. “They will value, I believe, and enjoy the deep flavors and layers of flavor. This skill comes with years of cooking and seasoning. Clean, flavorful food is always in fashion.”

Heinonen has been a chef for many years.

“I am old school. It takes years and years of experience. This is how you learn a trade like a carpenter or electrician. It is a trade because it is something you do with your hands. You don’t learn how to build a house sitting in a classroom. That is why there are apprenticeships. We are life-long students.”

He says he knew in high school he wanted to pursue hospitality.

“After freshman year in college, I worked for a couple of chefs. That is when I got serious about pursuing a career in culinary sciences,” he said. “I came up when there was no Food Network. Instead I buried my head in cookbooks and taught myself through trial and error… Lots of error. Any chef will tell you they have had a few catastrophes along the way.”

It is not always easy.

“I was talking to friend of mine [who is another chef]. After a few beers, you talk about why we do it.”

He says that the old saying that you will never work a day in your life if you love what you do is only partially true.

“It’s a labor of love and passion. I get really excited. Other times I am stagnant. It ebbs and flows as far as motivation.”

He has come to the conclusion that he and other chefs are “off their rockers to do what we do.”

He graduated from Northern Arizona University’s School of Hotel and Restaurant Management in 1994, then traveled and worked in the Pacific Northwest and California before coming back to Flagstaff. In 2005, he opened Cuvee 928 Wine Bar and Café, which had a healthy following and then opened the Tinderbox with his cousin in 2007, which for seven years offered classic American comfort food to Flagstaff.

“After seven years, I decided to leave the business for other interests.”

Now, in 2017, he is looking forward to opening The Cottage, a nostalgic French Bistro offering classics reinterpreted utilizing and seasonal flavors, through “heart and soul cooking accompanied by genuine hospitality and impeccable service in a comforting setting.”

Heather Malloy is a longtime fan of Scott’s cooking. “I remember when he opened Tinderbox and his food was just top notch, as well as his dedication to excellence and commitment to offering a high standard of cuisine. I am excited for him. Whatever he does he is going to do an excellent job,” she said.

Do I Really Need a Board of Directors?
What is Orthopaedic Trauma; How Do We Care for These Injuries?