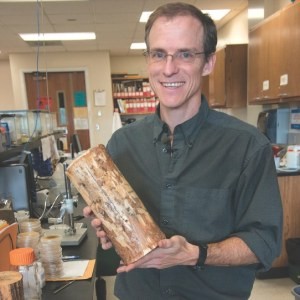 Ips, engraver, mountain pine. There are many different kinds of bark beetles, but together, they’ve chewed through millions of acres across western forests, hitting drought-stressed trees of the Coconino National Forest with a voracious appetite, especially in 2002. And with a drying, warming trend predicted in coming years, scientists say the climate may only become more favorable for multiple generations of bark beetles to breed and chomp the life out of conifers.

That is, unless entomologist Rich Hofstetter has way. Hofstetter is one of the world’s foremost experts in bark beetle behavior. From his Northern Arizona University laboratory, he may have the answer to stopping the most damaging ones.

You may recall Hofstetter’s research from the NAU School of Forestry a few years ago when he was experimenting with how sound changes bark beetle eating habits. His studies showed that by agitating the bugs – blasting them with loud rock music – he could successfully interfere with their behavior, keeping them from tunneling through the phloem underneath the bark and blocking nutrients from getting to the tree.

What is more, he found that by amplifying and turning their own sounds against them, he could make bark beetles crazy. They stopped chewing the wood and started attacking each other.

“This fungus that we’re working on is a native fungus that naturally kills bark beetles,” he said. “We have isolated particular strains and are testing to see whether these strains are effective against not only the mountain pine beetle, which is the most significant bark beetle in the West, but all the other bark beetles that we have in Arizona that are killing trees, as well as in Florida and in the eastern United States.”

Hofstetter was contacted by Montana Bio Agriculture to conduct the research and find the most deadly strain of the fungus. The company is developing fungal bioinsecticides to control bark beetles with an environmentally benign product that can be commercially produced and marketed to forest managers.

In nature, the fungus releases white powdery spores. When bark beetles crawl over the spores, Hofstetter says, the fungus gets into their bodies and takes over, killing them. So in his tests, Hofstetter uses a sprayer to cover tree trunks and logs with spores to see how effective the substance is against prevalent species of bark beetles.

“The spores of the fungus penetrate the exo-skeleton of the beetle,” he said. “And once they get inside, they replicate, they grow and kill the beetle within one to two days. Once the beetle is dead, the fungus grows outside of the beetle and produces more spores and can be picked up by other insects.”

“We see an increase in activity after disturbances like a wildfire,” she explained. “We see bark beetles in thick, overstocked stands that have a lower resistance and we definitely know that after droughts we get more bark beetle activity.”

Gaylord says warm temperatures allow the bugs to reproduce faster, and she notes trees that are lacking water don’t photosynthesize as well. “They shut down and aren’t able to produce resin, which the trees use to push the insect out.”

An aerial survey of the Coconino National Forest reveals 228,500 acres were impacted by bark beetles in 2003, up from 99,500 the year before, which scientists say is the result of drought. Although preliminary Forest Service surveys conducted this fall show the infestation has drastically decreased in the Coconino National Forest, some 2,500 acres are reported to be infested, researchers are wary that vast stretches of stressed, unhealthy pines could be poised for another destructive outbreak.

In the last 15 years, bark beetles have killed entire stands of trees from Mexico to Canada, but Hofstetter says Arizona is an excellent place to study them because “unfortunately… we have so many bark beetle species.” FBN