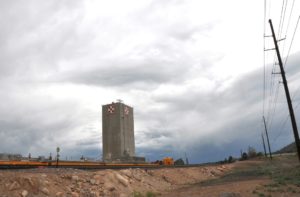 It is not the kind of an aroma that comes from a good meal.

Rather, the odor that wafts from the Nestle Purina manufacturing facility on the east side of Flagstaff may well be a smell that only a dog could love.

In fact, the plant odors are related to the pet food cooking process.

Although Nestlé Purina meets all state and federal air quality and odor requirements, funky smells from the plant in the past have upset some local residents living nearby, and have been a challenge for attracting new businesses to the area.

City and business leaders say this has been a special issue for food retailers, including restaurants considering moving to the mall, which opened in 2007 with plans for several restaurant options. Addressing these concerns, officials at the Nestle Purina Pet Care Company have said the company wants to be good neighbor.

To that end, Purina representatives are meeting with the Flagstaff City Council to discuss the possibility of working together to significantly reduce unwelcome odors emanating from the plant.

The topic of odor mitigation came up last year as part of a discussion at a Flagstaff City Council meeting about renewing the development agreement and GPLET [Government Property Lease Excise Tax] that the city has with Purina for another six months.

An extension was granted for the purpose of exploring “the feasibility of voluntary installation of equipment to achieve measurable odor mitigation related to expanded production,” according to a September work session document for the Council.

Apart from issues of odor control, the Nestle Purina residency in Flagstaff, which began in 1975, has provided many benefits for the community, say city officials, including creating a strong employment history, as well as helping local families and organizations.

“We love it here – Flagstaff is not only a great place to live and work because of the wonderful people who call this city home, but it’s also very supportive of manufacturing operations,” said Amy Kerr, factory manager at the Flagstaff plant. “We currently employ over 300 local residents at our facility, and that number is up from 250 in 2013.”

In addition, Purina is a STEM (Science, Technology, Engineering and Math education) partner in the school system, including supporting the Scientists in the Classroom program at Sinagua Middle School.

“Purina has done nothing wrong in this situation,” said Flagstaff Mayor Jerry Nabours. “The plant has been there a long time, and the city has grown toward the plant. Purina meets all legal requirements. I appreciate Purina’s willingness to work on a solution. They are a very good economic factor in Flagstaff, and we want to find a way to keep them here and reduce the smell.”

Last year, in an effort to eliminate bad smells, Purina staff began research into technologies that have been successful at other Purina plants around the country.

Kerr says the environmental engineering firm of Brown and Caldwell is the consulting partner on the smell elimination project.

“We brought in an environmental expert to evaluate the natural aroma from our cooking process and looked at a wide variety of proposed technologies,” she explained. “Using computer models and local weather conditions, we were then able to predict the effectiveness of different approaches.”

Kerr said the proposal calls for a multi-phased plan that will be implemented during the next four years.

“It incorporates two key types of mitigation techniques identified by our consultant, and the design is unique to our Flagstaff plant and its surroundings,” she explained.

The four-phase plan for odor control has been presented to the Flagstaff City Council.

“The end of each phase would include a review and validation step so that we can better fine-tune our approach as we go,” Kerr said. “We hope to gain alignment and proceed with installation by the end of 2016.”

Bonnie Bouschet, senior property manager at Flagstaff Mall and Marketplace, says she has been working closely with Kerr for several years. At first, Bouschet found the smells from the plant a little overwhelming, but she says Kerr has stepped forward to push for positive changes.

“It’s been a pleasure working with Amy; she wants to make a difference,” Bouschet said. “The progression we’ve come through has been great. She gets how important the community really is.”

Odor problems at the plant may have become more evident when the facility switched to a 24/7 schedule, operating on weekends when the mall was most busy, she noted.

Winds usually go from the west to the east, blowing the odors out of town, she added.

“We’re excited that they’re getting equipment in that will cut the odor back,” Bouschet said.

The opening later this year of the new 16-screen Harkins movie theater complex at The Marketplace, east of the Flagstaff Mall, is expected to attract more interest to the area.

“Once the theater comes to this side, we know it’s going to bring additional traffic to the east side of town,” she said. “It will give an opportunity to put in some new restaurants. We would like it to be an entertainment center: come shop, have some dinner, go to a movie, have a good time.”

Richard Bowen, an associate vice president of Economic Development at NAU and president of ECoNA, Economic Collaborative of Northern Arizona, said that although Nestle Purina was in under no real obligation to mitigate odors, Kerr, who is a member of the ECoNA Executive Board, immediately adopted a good neighbor policy and began to develop solutions to remediate the odor.

“As a partner in economic development in Flagstaff, Amy immediately recognized that as East Flagstaff continues to develop and grow new businesses, the odor issue was becoming a growth constraint and a nuisance for the existing businesses and residents,” Bowen said. “However, she soon recognized that the odor mitigation solutions are expensive and technically complicated.”

Company officials say costs for odor-control improvements could run $ 1 million or more and would take several years to implement.

Walter Crutchfield, a partner in Vintage Partners in Phoenix, the developers building the new theater on the east side, says Purina has been trying hard to improve the odor problems at the plant.

“We support that they have been an employer in Flagstaff for dozens and dozens of years, and that is significant,” Crutchfield said. “Obviously, the more successful they are in the mitigation of smells, it opens up more opportunities for a greater variety of restaurants and others who would come to an environment that is smell-free.”

Bowen said the idea of tax abatement (reduction or exemption from taxes) to help offset a small portion of the odor mitigation makes sense to him.

“The public will gain a significant return on investment in future sales taxes from economic growth, direct jobs and capital investment from the growth of Nestle Purina, and of course, an improved quality of life,” Bowen said.

“In fact, our plant was the first to make Beneful’s new beef and chicken dry dog food recipes, which now have real meat as the No.1 ingredient,” she said.

Kerr says the corporate office of Purina has not received any complaints related to the aroma from the cooking process.

“On the local level, we do appreciate the opportunity to hear from local residents and business owners and to understand and talk with them about their concerns,” she said.

One Response to Seeking Solutions for Unwanted Smells