You are here: Home / FBN Spotlight / Shooting for Excellence in the Office, Arena 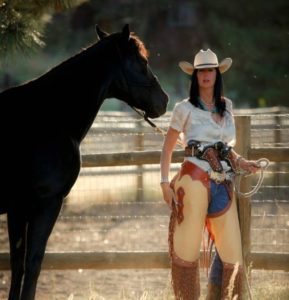 One of the best teachers Janel Miller ever had was a horse named Rowdy.

Miller, who competes in mounted shooting as a hobby, said when a person first gets into the sport a seasoned horse helps them learn.

“He had trained hundreds of people in my sport when they first started.”

Rowdy was owned by one of the main trainers of the sport.

“I was blessed. I rode him the first two years and then passed him on to a friend. He was an icon,” she said.

“He moved on to the pastures in the sky. He was a super horse,” she said.

Now, Miller is a skilled competitor and has many victory belt buckles to prove it.

But mounted shooting is not Miller’s only skill. She is a wife, a mother of three and the branch manager and escrow officer of Pioneer Title, which recently merged with Metro Title.

“It was a huge success and was going very strong,” she said.

“It was a merger to allow Pioneer Title to get into the Pima [County] Market.

“It had been the owner’s dream to add Pima to his portfolio.”

Metro liked her so much they asked her to stay on as branch manager and escrow officer.

Cabrina Weems worked with Miller in 2003, the first time she was at Pioneer Title.

“She is an exceptional employee, very professional, very polished and very well spoken. I am glad Janel is back at Pioneer,” she said. “She has been a true friend for many years and I have enjoyed working with her.”

Miller is originally from Nebraska and went to college there, but she and her sister were longing for adventure.

“We wanted to be in the mountains because of the snow skiing in the winter, Lake Powell in the summer and miles of land to hike. Arizona has a lot to offer.”

It was also where she met her husband, Flagstaff Deputy Police Chief Walter Miller.

They were introduced by her sister’s husband. They were married and have three daughters, ages 24, 21 and 20.

She and her husband are avid archers.

“We like to shoot our bows. We shoot together. We are outdoors people. We enjoy camping and hunting. We enjoy doing things together.”

But mounted shooting is her favorite hobby.

“We run a pattern with two, 45-single-action revolvers loaded with black powder. We have 52 patterns of 10 balloons we have to shoot and it’s a timed event,” she said.

The pattern is unknown to contestants until the day of the event. Points are deducted for running the pattern incorrectly, missing a balloon, dropping a gun or knocking over a barrel.

“It is a fairly new sport, but now it’s starting to grow,” she said. “They used to run down at Bumblebee in the riverbed where the targets were placed.”

Miller has had a horse in her life since she was 12. She previously served her community by being a member of the mounted search and rescue team, which was eventually phased out.

“I was looking for something that gave me purpose with my horse,” she said.

She got into the sport because of a woman who spoke at her horse group luncheon.

“I had never competed in anything in my life,” she said, but understands how people can be passionate about a sport.

“The camaraderie has blossomed and grown.”

Miller had a phenomenal season in 2011 when she won six belt buckles. Then came a dry spell when she had to concentrate more on her job and her children, who needed her to be around more. This year, she hopes to spend more time in the winners’ circle. She has one win already.

Perhaps joining her there will be long-time friend Elise Wilson, who was introduced to the sport by Miller.

“She and a few other girls started mounted shooting. I would just go and watch,” Wilson said.

After a year-and-half, Wilson decided to give it a try. “I shot my first balloon off her horse [Rowdy] with her guns. I did it at a trot and couldn’t sleep that night. I was totally hooked.”

“You never want to betray anyone’s trust. I have found it is so important to be trustworthy and have integrity.”

“There’s the movie and book, ‘Wild,’ about a woman who hikes the Pacific Crest Trail alone. That is a huge accomplishment for a person to do alone.”

“My husband and I shared our anniversary on March 17 this year. We went to Prescott and had a fantastic time on Whisky Row. We danced a lot.”

“I have a Superwoman figure on my desk. I multitask and use that skill all the time to accomplish a lot of things all at once.” FBN