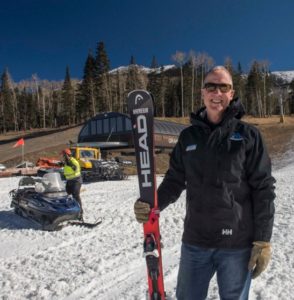 In his second season as assistant general manager at Arizona Snowbowl, Rob Linde said he is “living the dream.”

“It is a new adventure for me and my family.”

Linde’s duties include overseeing the day-to-day operation of the resort, which includes the ski school, food and beverage department, parking, the chairlifts and rental shop.

“It’s like a little city up there,” he said. “We have a lot of great employees. The ski business is filled with people who enjoy their jobs and love skiing.”

Linde decided he wanted to travel to and live in the mountains when was young. His career has enabled him to live in Colorado and Arizona. He began in the ski industry as an instructor at Snowbowl while attending Northern Arizona University, where he majored in business.

It was his passion for skiing that brought him to Flagstaff. He continues to ski as often as he can. “It’s like floating with a total sense of freedom.”

Linde was born in Massachusetts, but spent most of his childhood in Ohio. He grew up enjoying the outdoors with activities like off-road biking and ice hockey.

He took ski trips to Colorado where he eventually lived and worked for 25 years in the industry, including working for the National Ski Area Association.

He says the industry has improved over the years with lifts that are higher-tech, faster and safer. “Ski gear and apparel are better and protect the skier in adverse conditions, but the people who work in the industry haven’t changed. They have a passion for skiing and snowboarding.”

At Snowbowl, he says being able to manufacture snow has been a game changer. “We were able to open for the Thanksgiving holiday. In recent memory, there has not been a lot of natural snow this time of year.”

He added that the economic boost from snowmaking and having the ski resort open is a big source for ancillary businesses such as ski shops, outdoor recreation shops, restaurants and hotels.

“Snowbowl is a very special place. It is unique with the canyons surrounding it. It is magical.”

“Do what you love and you can make a living from doing it. That advice was from my father.”

“I find myself in mountain settings.”

What is your all-time favorite movie?

Arizona Snowbowl Assistant General Manager Rob Linde says the ski industry has changed over the years with safer and higher performing gear and equipment, but the people haven’t. “They have a passion for skiing and snowboarding.”